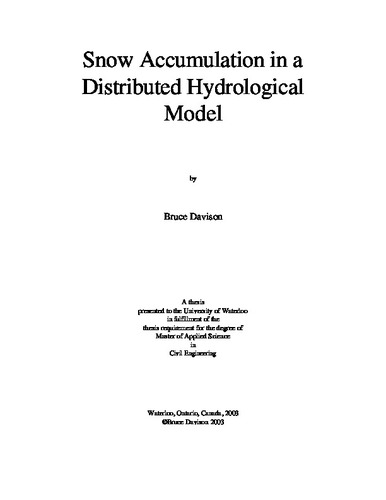 The cryosphere is defined as the portions of the earth where water is in solid form. It represents a very important part of the hydrologic cycle, affecting ecological, human and climate systems. A number of component models describing the energy and mass balances of a snowpack have been developed and these component models are finding their way into watershed models and land surface schemes. The purpose of this thesis is to examine the incorporation of a number of snow processes in the coupled land-surface-hydrological model WATCLASS. The processes under consideration were mixed precipitation, variable fresh snow density, maximum snowpack density, canopy interception and snow-covered area (SCA). The first four of these processes were based on similar work done by Fassnacht (2000) on a watershed in Southern Ontario. In the case of this thesis, the work was completed on a basin in Northern Manitoba. A theory of the relationship between snow-covered area and average snow depth was developed and an algorithm was developed to implement this theory in WATCLASS. Of the five snow processes considered, mixed precipitation was found to have the greatest impact on streamflow while the new canopy interception algorithm was found to have the greatest impact on sensible and latent heat fluxes. The development of a new relationship between SCA and average snow depth was found to have a minimal impact in one study case, but a significant impact on the sensible and latent heat fluxes when snow fell on a pack that had begun to melt and was partially free of snow. Further study of these snow processes in land-surface-hydrologic models is recommended.