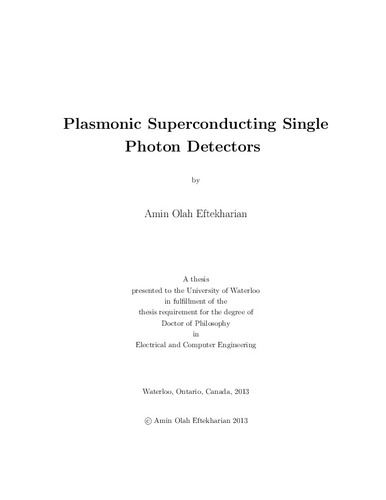 A theoretical model with experimental verification is presented to enhance the quantum efficiency of a superconducting single-photon detector without increasing the length or thickness of the active element. The basic enhancement framework is based on: (1) Utilizing the plasmonic nature of a superconducting layer to increase the surface absorption of the input optical signal. (2) Enhancing the critical current of the nanowires by reducing the current crowding at the bend areas through optimally rounded-bend implementation. The experimental system quantum efficiency and fluctuation rates per second are assessed and compared to the proposed theoretical model. The model originated from an accurate description of the different liberation mechanisms of the nano-patterned superconducting films (vortex hopping and vortex-antivortex pairing). It is built complimentary to the existing, well-established models by considering the effects of quantum confinement on the singularities' energy states. The proposed model explains the dynamics of singularities for a wide range of temperatures and widths and describe an accurate count rate behavior for the structure. Furthermore, it explains the abnormal behaviors of the measured fluctuation rates occurring in wide nano-patterned superconducting structures below the critical temperature. In accordance to this model, it has been shown that for a typical strip width, not only is the vortex-antivortex liberation higher than the predicted rate, but also quantum tunneling is significant in certain conditions, and cannot be neglected as it has been in previous models. Also it is concluded that to satisfy both optical guiding and photon detection considerations of the design, the width and the thickness of the superconducting wires should be carefully determined in order to maintain the device sensitivity while crossing over from the current crowding to vortex-based detection mechanisms.