Drawing on the Margins of History: English-Language Graphic Narratives in Canada 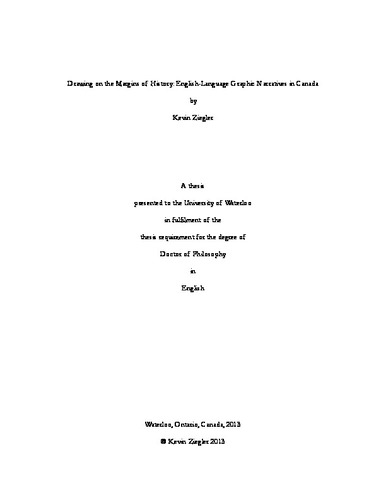 This study analyzes the techniques that Canadian comics life writers develop to construct personal histories. I examine a broad selection of texts including graphic autobiography, biography, memoir, and diary in order to argue that writers and readers can, through these graphic narratives, engage with an eclectic and eccentric understanding of Canadian historical subjects. Contemporary Canadian comics are important for Canadian literature and life writing because they acknowledge the importance of contemporary urban and marginal subcultures and function as representations of people who occasionally experience economic scarcity. I focus on stories of “ordinary” people because their stories have often been excluded from accounts of Canadian public life and cultural history. Following the example of Barbara Godard, Heather Murray, and Roxanne Rimstead, I re-evaluate Canadian literatures by considering the importance of marginal literary products. Canadian comics authors rarely construct narratives about representative figures standing in place of and speaking for a broad community; instead, they create what Murray calls “history with a human face . . . the face of the daily, the ordinary” (“Literary History as Microhistory” 411). My research finds that contemporary Canadian graphic narratives create mundane personal histories using a medium that is inherently attuned to exaggeration and fragmentation. My reading of graphic narrative is based on “autographics,” a recent field of scholarship that analyzes the interactions between visual and verbal forms of communication in works of life writing. I draw on visual rhetorical studies and communication design in order to describe “the distinctive technology and aesthetics of life narrative that emerges in comics” (Whitlock 965). The medium of comics playfully manipulates the discourses of documentary evidence and testimonial authority. At the same time, it gives Canadian authors tools for depicting the experiences of ordinary individuals through a rich collection of emotional, sensorial, and perceptual information. Focusing on the work of such authors as Chester Brown, David Collier, Julie Doucet, Sarah Leavitt, and Seth, I suggest that Canadian comics authors exploit the unique formal properties of the medium of comics in order to interrogate dominant nationalist discourses. They also develop an alternative method for analyzing narratives about the past.