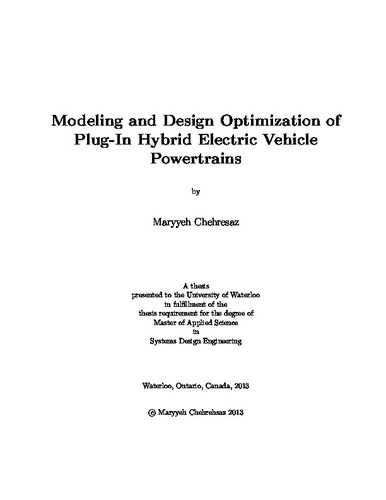 Hybrid electric vehicles (HEVs) were introduced in response to rising environmental challenges facing the automotive sector. HEVs combine the benefits of electric vehicles and conventional internal combustion engine vehicles, integrating an electrical system (a battery and an electric motor) with an engine to provide improved fuel economy and reduced emissions, while maintaining adequate driving range. By comparison with conventional HEVs, plug-in hybrid electric vehicles (PHEVs) have larger battery storage systems and can be fully charged via an external electric power source such as the electrical grid. Of the three primary PHEV architectures, power-split architectures tend to provide greater efficiencies than parallel or series systems; however, they also demonstrate more complicated dynamics. Thus, in this research project, the problem of optimizing the component sizes of a power-split PHEV was addressed in an effort to exploit the flexibility of this powertrain system and further improve the vehicle's fuel economy, using a Toyota plug-in Prius as the baseline vehicle. Autonomie software was used to develop a vehicle model, which was then applied to formulate an optimization problem for which the main objective is to minimize fuel consumption over standard driving cycles. The design variables considered were: the engine's maximum power, the number of battery cells and the electric motor's maximum power. The genetic algorithm approach was employed to solve the optimization problem for various drive cycles and an acceptable reduction in fuel consumption was achieved thorough the sizing process. The model was validated against a MapleSim model. This research project successfully delivered a framework that integrates an Autonomie PHEV model and genetic algorithm optimization and can be used to address any HEV parameter optimization problem, with any objective, constraints, design variables and optimization parameters.