Path Following and Stabilization of an Autonomous Bicycle 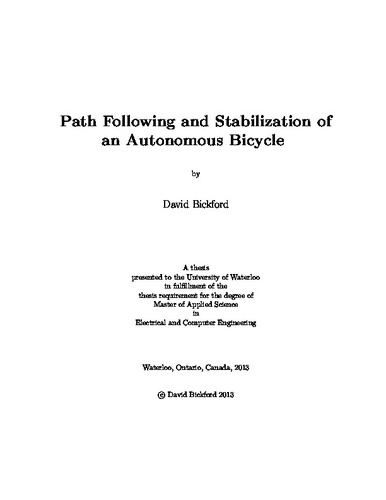 In this thesis we investigate the problem of designing a control system for a modern bicycle so that the bicycle is stable and follows a path. We propose a multi-loop control architecture, where each loop is systematically designed using linear control techniques. The proposed strategy guarantees that the bicycle asymptotically converges to paths of constant curvature. A key advantage of our approach is that by using linear techniques analysis and controller design are relatively simple. We base our control design on the nonlinear (corrected) Whipple model, which has been previously verified for correctness and experimentally validated. The equations of motion for the nonlinear model are very complicated, and would take many pages to explicitly state. They also have no known closed form solution. To enable analysis of the model we linearize it about a trajectory such that the bicycle is upright and travelling straight ahead. This linearization allows us to arrive at a parameterized linear time-invariant state-space representation of the bicycle dynamics, suitable for analysis and control design. The inner-loop control consists of a forward-speed controller as well as a lean and steer controller. To keep the bicycle at a constant forward speed, we develop a high-bandwidth proportional controller that uses a torque along the axis of the rear wheel of the bicycle to keep the angular velocity of the rear wheel at a constant setpoint. To stabilize the bicycle at this forward speed, lean torque and steer torque are treated as the control signals. We design a state-feedback controller and augment integrators to the output feedback of the lean angle and steer angle to provide perfect steady-state tracking. To arrive at the gains for state feedback, linear-quadratic regulator methods are used. When following a constant-curvature path, a vehicle has a constant yaw rate. Using this knowledge, we begin designing the outer-loop path-following control by finding a map that converts a yaw rate into appropriate lean angle and steer angle references for the inner loop. After the map is completed, system identification is performed by applying a yaw-rate reference to the map and analyzing the response of the bicycle. Using the linear approximation obtained, a classical feedback controller for yaw-rate tracking is designed. In addition to yaw-rate control, to track a path the yaw angle of the bicycle must match that of the path and the bicycle must physically be on the path. To analyze these conditions a linear approximation for the distance between the bicycle to the path is found, enabling construction of a linear approximation of the entire system. We then find that by passing the signal for the difference in yaw rate and the distance through separate controllers, summing their output, and subtracting from the reference yaw rate of the path, the bicycle converges to the path. After developing the general design procedure, the final part of the thesis shows a step by step design example and demonstrates the results of applying the proposed control architecture to the nonlinear bicycle model. We highlight some problems that can arise when the bicycle is started far from the path. To overcome these problems we develop the concept of a virtual path, which is a path that when followed returns the bicycle to the actual path. We also recognize that, in practice, typical paths do not have constant curvature, so we construct more practical paths by joining straight line segments and circular arc segments, representing a practical path similar to a path that would be encountered when biking through a series of rural roads. Finally, we finish the design example by demonstrating the performance of the control architecture on such a path. From these simulations we show that using the suggested controller design that the bicycle will converge to a constant curvature path. Additionally with using the controllers we develop that in the absence of disturbance the bicycle will stay within the intended traffic lane when travelling on a typical rural road.