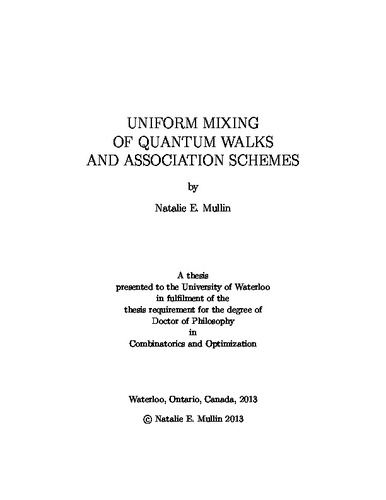 In recent years quantum algorithms have become a popular area of mathematical research. Farhi and Gutmann introduced the concept of a quantum walk in 1998. In this thesis we investigate mixing properties of continuous-time quantum walks from a mathematical perspective. We focus on the connections between mixing properties and association schemes. There are three main goals of this thesis. Our primary goal is to develop the algebraic groundwork necessary to systematically study mixing properties of continuous-time quantum walks on regular graphs. Using these tools we achieve two additional goals: we construct new families of graphs that admit uniform mixing, and we prove that other families of graphs never admit uniform mixing. We begin by introducing association schemes and continuous-time quantum walks. Within this framework we develop specific algebraic machinery to tackle the uniform mixing problem. Our main algebraic result shows that if a graph has an irrational eigenvalue, then its transition matrix has at least one transcendental coordinate at all nonzero times. Next we study algebraic varieties related to uniform mixing to determine information about the coordinates of the corresponding transition matrices. Combining this with our main algebraic result we prove that uniform mixing does not occur on even cycles or prime cycles. However, we show that the probability distribution of a quantum walk on a prime cycle gets arbitrarily close to uniform. Finally we consider uniform mixing on Cayley graphs of elementary abelian groups. We utilize graph quotients to connect the mixing properties of these graphs to Hamming graphs. This enables us to find new results about uniform mixing on Cayley graphs of certain elementary abelian groups.