Planning for Near-campus Neighbourhoods in Ontario: Challenges and Planning Responses 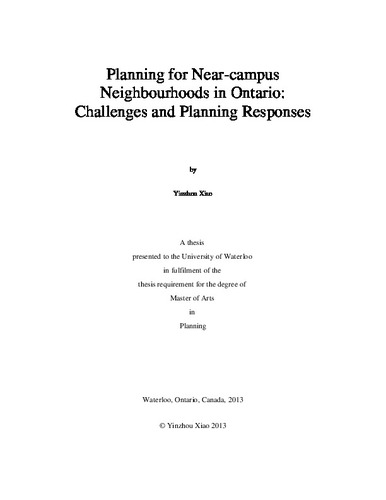 With increased enrolment in post-secondary education in Canada, communities hosting universities or colleges have witnessed a higher number of students residing in their near-campus neighbourhoods. The concentration of students has negative impacts on these once low-density, family-oriented neighbourhoods. Near-campus neighbourhoods are often associated with images of run-down properties, garbage-strewn front yards, and alcohol fuelled parties. Some Ontario municipalities have responded to these problems with student accommodation strategies and planning initiatives. However, the problems in near-campus neighbourhoods and the effectiveness of the planning strategies have not been well understood due to the novelty of the issue and the scarcity of related research in the Canadian context. This study aims to answer two research questions: 1) what are the impacts of student populations on near-campus neighbourhoods in Ontario? 2) how, and how effectively, have planning authorities responded to the challenges of near-campus neighbourhoods? To answer these research questions, surveys and interviews were conducted among planners and post-secondary institution housing officers in Ontario university/college communities. Evidence was also sought from other resources including other academic studies, planning documents and media output. The study results showed that at least 23 Ontario municipalities faced challenges associated with the concentration of student population in near-campus neighbourhoods. The challenges relate to demographic imbalance, decreased rates of homeownership, a deteriorating neighbourhood environment, and student behavioural issues. However, only around half of the affected communities have developed planning strategies to respond to the challenges. Eleven planning approaches are identified, analyzed, and evaluated in the study. In general, planning policies to encourage high-density development to accommodate students are common approaches and considered effective: purpose-built student housing has significantly increased its market share in some university communities. This type of development relieves housing pressure, but it is not clear if it helps to stabilize low-density neighbourhoods near campus; the attempt to regulate the student private rental market by zoning and licensing regimes has several drawbacks. The study also reveals diverse interests of different stakeholders in near-campus neighbourhoods, and the lack of effective collaboration and partnerships among them in addressing challenges in their neighbourhoods in general.