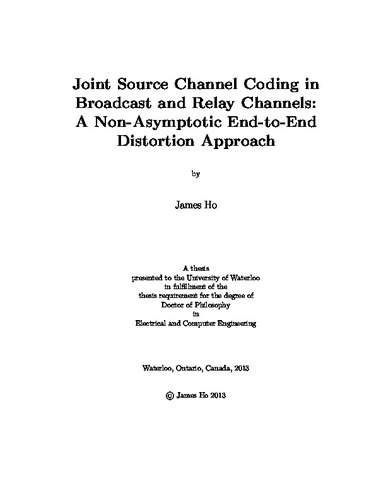 The paradigm of separate source-channel coding is inspired by Shannon's separation result, which implies the asymptotic optimality of designing source and channel coding independently from each other. The result exploits the fact that channel error probabilities can be made arbitrarily small, as long as the block length of the channel code can be made arbitrarily large. However, this is not possible in practice, where the block length is either fixed or restricted to a range of finite values. As a result, the optimality of source and channel coding separation becomes unknown, leading researchers to consider joint source-channel coding (JSCC) to further improve the performance of practical systems that must operate in the finite block length regime. With this motivation, this thesis investigates the application of JSCC principles for multimedia communications over point-to-point, broadcast, and relay channels. All analyses are conducted from the perspective of end-to-end distortion (EED) for results that are applicable to channel codes with finite block lengths in pursuing insights into practical design. The thesis first revisits the fundamental open problem of the separation of source and channel coding in the finite block length regime. Derived formulations and numerical analyses for a source-channel coding system reveal many scenarios where the EED reduction is positive when pairing the channel-optimized source quantizer (COSQ) with an optimal channel code, hence establishing the invalidity of the separation theorem in the finite block length regime. With this, further improvements to JSCC systems are considered by augmenting error detection codes with the COSQ. Closed-form EED expressions for such system are derived, from which necessary optimality conditions are identified and used in proposed algorithms for system design. Results for both the point-to-point and broadcast channels demonstrate significant reductions to the EED without sacrificing bandwidth when considering a tradeoff between quantization and error detection coding rates. Lastly, the JSCC system is considered under relay channels, for which a computable measure of the EED is derived for any relay channel conditions with nonzero channel error probabilities. To emphasize the importance of analyzing JSCC systems under finite block lengths, the large sub-optimality in performance is demonstrated when solving the power allocation configuration problem according to capacity-based formulations that disregard channel errors, as opposed to those based on the EED. Although this thesis only considers one JSCC setup of many, it is concluded that consideration of JSCC systems from a non-asymptotic perspective not only is more meaningful, but also reveals more relevant insight into practical system design. This thesis accomplishes such by maintaining the EED as a measure of system performance in each of the considered point-to-point, broadcast, and relay cases.