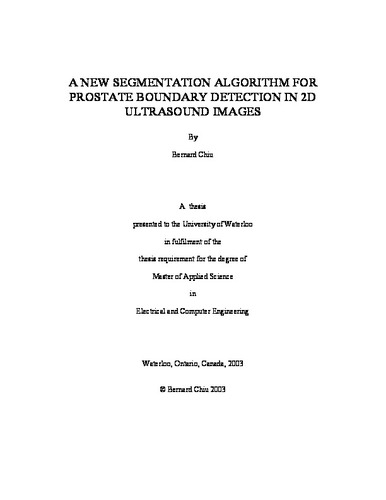 Prostate segmentation is a required step in determining the volume of a prostate, which is very important in the diagnosis and the treatment of prostate cancer. In the past, radiologists manually segment the two-dimensional cross-sectional ultrasound images. Typically, it is necessary for them to outline at least a hundred of cross-sectional images in order to get an accurate estimate of the prostate's volume. This approach is very time-consuming. To be more efficient in accomplishing this task, an automated procedure has to be developed. However, because of the quality of the ultrasound image, it is very difficult to develop a computerized method for defining boundary of an object in an ultrasound image. The goal of this thesis is to find an automated segmentation algorithm for detecting the boundary of the prostate in ultrasound images. As the first step in this endeavour, a semi-automatic segmentation method is designed. This method is only semi-automatic because it requires the user to enter four initialization points, which are the data required in defining the initial contour. The discrete dynamic contour (DDC) algorithm is then used to automatically update the contour. The DDC model is made up of a set of connected vertices. When provided with an energy field that describes the features of the ultrasound image, the model automatically adjusts the vertices of the contour to attain a maximum energy. In the proposed algorithm, Mallat's dyadic wavelet transform is used to determine the energy field. Using the dyadic wavelet transform, approximate coefficients and detailed coefficients at different scales can be generated. In particular, the two sets of detailed coefficients represent the gradient of the smoothed ultrasound image. Since the gradient modulus is high at the locations where edge features appear, it is assigned to be the energy field used to drive the DDC model. The ultimate goal of this work is to develop a fully-automatic segmentation algorithm. Since only the initialization stage requires human supervision in the proposed semi-automatic initialization algorithm, the task of developing a fully-automatic segmentation algorithm is reduced to designing a fully-automatic initialization process. Such a process is introduced in this thesis. In this work, the contours defined by the semi-automatic and the fully-automatic segmentation algorithm are compared with the boundary outlined by an expert observer. Tested using 8 sample images, the mean absolute difference between the semi-automatically defined and the manually outlined boundary is less than 2. 5 pixels, and that between the fully-automatically defined and the manually outlined boundary is less than 4 pixels. Automated segmentation tools that achieve this level of accuracy would be very useful in assisting radiologists to accomplish the task of segmenting prostate boundary much more efficiently.