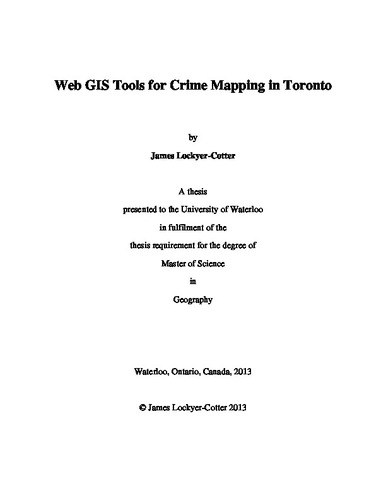 The field of crime mapping has an extensive history, yet it has managed to remain an effective tool for policing even in modern times. This success can be attributed in part to the field’s willingness to adapt to newer technologies as they have become available. A current trend that is occurring internationally is the practice of online crime mapping. Many police services from around the world have recognized the importance of using the Internet to connect with the public that they serve. To this end, while most police services have an online presence in the form of a Web site, some have opted to go further and to publish their crime data spatially in the form of an interactive Web-based mapping application. Presently, the City of Toronto has opted not to engage in interactive Web mapping and has limited their online publications to only static maps and written crime reports. This thesis attempts to build upon the capabilities that are offered by Web GIS tools for crime mapping applications in the City of Toronto. To achieve this, two Web applications were developed to help facilitate the process of reporting crime incidents and gang-related graffiti. The services in these Web applications were developed using ArcGIS for Desktop 10.1 and hosted using ArcGIS for Server 10.1, while the Web applications themselves were developed using the ArcGIS API for JavaScript. Each application was designed to support interactive incident mapping, as well as anonymous incident reporting. In addition, the Graffiti Tagger application utilized a mobile-themed interface and image attachments to promote on-the-go graffiti incident reporting. By doing this, it was hypothesized that the overall quality and quantity of data contributed to the Toronto Police Service would increase. To test this hypothesis, a survey was developed and released to a number of participants with varying backgrounds and technical skill levels. The results of this survey showed that a public desire did exist for both of these Web applications, along with a willingness from the majority of participants to voluntarily participate in using these applications. These results suggest that adopting the use of Web mapping applications has the potential to increase the quantity, and potentially the quality, of crime data that is reported.