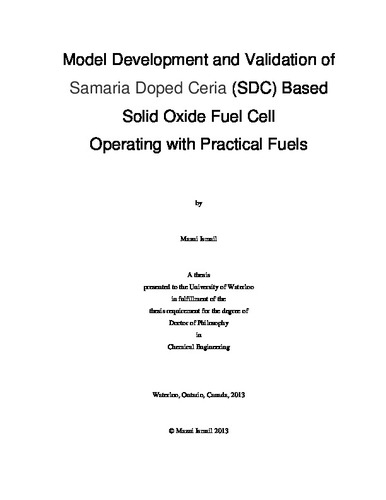 Solid Oxide Fuel Cell (SOFC) is a promising technology for producing electricity cleanly and efficiently. This type of fuel cell is a high temperature fuel cell operating around 1000C for state-of-the-art SOFC. An advantage of the high temperature is the possibility of combined heat and power generation which would even further increase the efficiency of this technology. However, due to high operating temperatures, there are problems associated with the development and commercialization of SOFC, such as requirement of high temperature gas seals, and relatively poor long-term stability. The current trend in SOFC development is therefore to reduce the operating temperature of the cell to the range 600-800°C. However, this requires developing new cell designs and materials since decreasing the operating temperature increases the ohmic overpotential due to higher ionic diffusion resistance in the electrolyte, thereby reducing electrochemical performance. For intermediate temperature SOFC, SDC is a promising electrolyte material to reduce the ohmic overpotential. The present research focused on developing a 1D model of SDC based SOFC validated for a number of feed gas compositions, from humidified H2, mixture of CO and CO2, to several syngas compositions (typical of diesel syngas, biomass syngas and pre-reformed natural gas). The model was developed for an anode supported cell. Few parameters were used as free fit parameters: essentially structural parameters, such as porosity and tortuosity, as well as kinetic parameters for H2 and CO electrochemical reactions. In most cases, the simulated results (polarization curve) fitted well the experimental data. It was seen that the performance of CO/CO2 system is considerably lower than the H2/H2O system. The model results also allowed to access variables’ profiles that would not be accessible experimentally, such species composition profile and local current density along the anode. In particular, it was observed that most the electrochemical reaction occurred within 10 m away from the anode/electrolyte interface. In the literature, the water-gas shift (WGS) reaction is considered to occur only over Ni, but the present work demonstrated that SDC is active toward the WGS reaction. Therefore, a kinetic study was carried out to determine a rate expression for the WGS reaction. This rate expression was then incorporated into the SOFC model. The results indicated that inclusion of the WGS reaction on SDC has minor or negligible effect in most situations, except in the case of CO mole fraction for the diesel syngas feed at higher cell voltage. The reason was that the composition of diesel syngas was such that there was a higher driving force for the WGS reaction to proceed in the reverse WGS direction. When the water content is high enough, as in the case of higher current densities, the form of the derived rate expression for the WGS on SDC makes the value of this rate very small. The rate expression was derived using relatively small amounts of water because of experimental limitation and therefore, the form of this rate needs to be revisited by considering higher amount of water.