Seeking Structure in Social Organization: Compensatory Control and the Psychological Advantages of Hierarchy 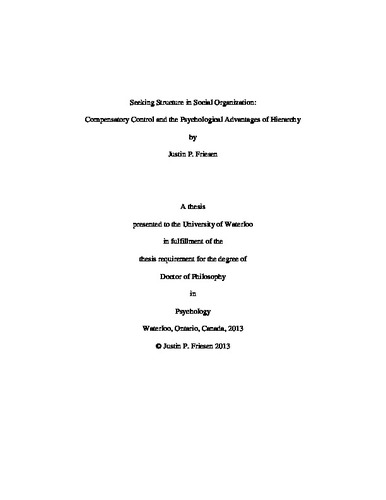 Hierarchies are a ubiquitous form of human social organization. I hypothesized that one reason for hierarchies’ prevalence might be that core motivational needs for order and control make hierarchies psychologically appealing—because of the structure they offer—relative to other, less structured forms of social organization. This hypothesis is rooted in compensatory control theory (Kay et al., 2008), which posits that individuals have a basic need to perceive the world as orderly and structured. Therefore, personal and external sources of control are substitutable, inasmuch as they both serve the superordinate goal of believing that the world operates in an orderly fashion. An initial study confirmed that hierarchies are perceived as more structured and orderly relative to egalitarian arrangements. In five subsequent experiments, I threatened participants’ sense of personal control to increase their need to rely on external structure. Participants who lacked control perceived more hierarchy occurring in ambiguous social situations (Study 2) and preferred hierarchy more strongly in business contexts (Studies 3-4). Two studies tested my account that hierarchies are appealing because of their structure. Preference for hierarchy was higher among individuals high in Personal Need for Structure (PNS), and control threat increased preference for hierarchy even among low-PNS participants (Study 4). Importantly, framing a hierarchy as unstructured reversed the previous effects, so that participants who lacked control now found hierarchy unappealing (Study 5). A final study found that hierarchy-enhancing careers were more appealing after control threat, even when those jobs were low-status (Study 6). I discuss how the compensatory control account for the allure of hierarchies complements and extends other influential theories of hierarchy maintenance, such as Social Dominance Theory and System Justification Theory.