Bond and Development Length in Concrete Beams with Exposed Reinforcement 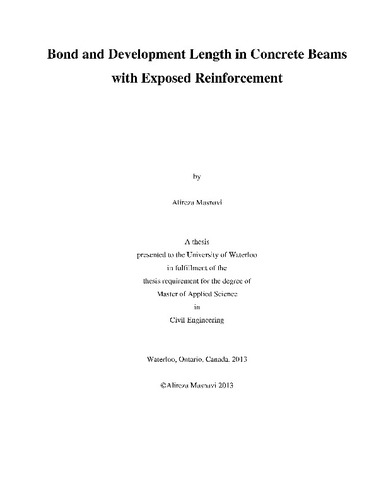 Corrosion of steel reinforcement in Ontario bridges is causing severe soffit spalling in many situations. These spalled areas are often located within the lap splices and curtailment zones of the primary reinforcement. This can lead to inadequate bar development lengths and the possibility of failures. In order to better predict the residual strength of these deteriorated bridges, a test program was designed, which involved mid-sized concrete beam specimens, with partially de-bonded reinforcement. The de-bonding was simulated in various beam locations, with various de-bonding patterns. The test program consisted of thirteen beams; ten under-reinforced and three over-reinforced. All beams had dimensions of 2100×150×100 mm. The span between simple supports was 1900 mm with a single point load applied at the midspan. Rebar strains and displacement at the midspan were recorded. The goal of this experimental study was to determine the correlation between the spatial location and surface area of de-bonding with the strength of the beams. This was achieved by testing beam specimens with different combinations of de-bonding patterns with respect to location and area. Four beams had de-bonded reinforcement in the flexural zones, seven were de-bonded in the anchorage and flexural zones, and two were fully bonded. In a previous study, a so-called “modified area concept” was developed for rapid assessment of the remaining capacity of heavily spalled girders. This concept was integrated in a computer program, which assesses girder capacity, given a graphical spalling survey and a structural drawing of the girder. The developed program can be easily adapted for full bridge analysis, and to evaluate the effects of reinforcement cross section loss and bond deterioration. The research presented in the current thesis investigates several of the assumptions made in this previous study. The current thesis includes the rationale for the design of the experimental program. In addition, the test results are presented and analyzed. By analyzing the failure modes, failure loads, and crack patterns, along with the load-displacement, load-stiffness, and load-strain behaviour of the various beams, it is concluded that: 1) reinforced concrete beams can carry a significant portion of their original capacity after losing cover over a significant portion of their flexural reinforcement, 2) predictions of the beam capacities and failure modes using the modified area concept are reasonably accurate and conservative in most cases, and 3) the flexural stiffness of the beams was seen to decrease with an increase in the length of the exposed area, in most cases. Recommended areas of future research are identified, including: 1) tests of beams with splices in the flexural reinforcing along the span, 2) field investigation of the concrete strength in regions of the soffit immediately adjacent to the spalled regions, and 3) the development of a correction factor to account for the effects of violating the plane sections assumption.