The Zombie in American Culture 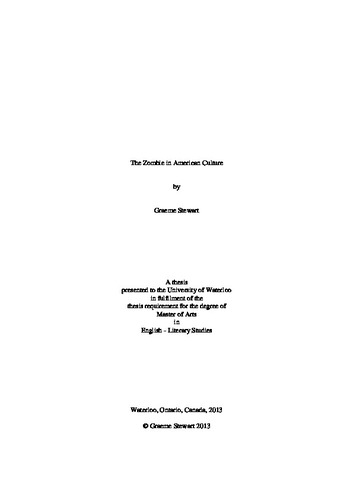 My research explores how the oft-maligned zombie genre reveals deep-seated American cultural tendencies drawn from the nation's history with colonization and imperialism. The zombie genre is a quintessentially American construct that has been flourishing in popular culture for nearly 60 years. Since George A. Romero first pioneered the genre with 1968's Night of the Living Dead, zombie narratives have demonstrated a persistent resilience in American culture to emerge as the ultimate American horror icon. First serving as a method to exploit and react to cultural anxieties in the 1960s, the zombie genre met the decade's tumultuous violence in international conflicts like the Vietnam War and domestic revolutions like the Civil Rights Movement. It adapted in the 1970s to expose a perceived excess in consumer culture before reflecting apocalyptic fears at the height of the Cold War in the 1980s. Following a period of rest in the relatively peaceful 1990s, the genre re-emerged in the early 2000s to reflect cultural anxieties spurred on by the attacks on the World Trade Center in New York and the subsequent resurgence of war those attacks inspired. Its ability to grow with American culture and reflect the relevant crises of the age in which each narrative is conceived suggests the genre can act as a barometer of cultural and social change and unrest. The zombie genre is ultimately an American construct as it is the only folkloric monster born of an American imagination. Romero's re-envisioning of the genre to an apocalyptic siege narrative rather than an icon of Haitian lore presented American audiences with a perfect outlet to embrace survivalist fantasies that hearken back to the nations birth on the frontier. It can be aligned alongside the plight of early settlers, as its characters find themselves displaced between a lost concept of society and the need to rebuild in a new, hostile environment. An environment which allows the return of iconic frontier figures like Daniel Boone, while redefining the role of the family to suit the needs of such an environment. It provides scenarios in which the nation can be regenerated through violence as the emergence of an antagonistic foe devoid of morality and consciousness must be met with extreme prejudice. It strips the antagonist of personality and thought, allowing audiences to return to an imperialistic conquest of a conquerable foe while eliminating any guilt associated with the act of colonization. In doing so, the genre glorifies the American past, allowing the reopening of the frontier in the zombie apocalypse as a method of escaping current cultural anxieties and romanticising concepts like the Indian hunter while stripping them of negative association. This thesis will suggest that the zombie has emerged as the ultimate American horror icon, and that it will continue to remain as such so long as there are instances of tumult and instability in the American cultural zeitgeist to which it can react.