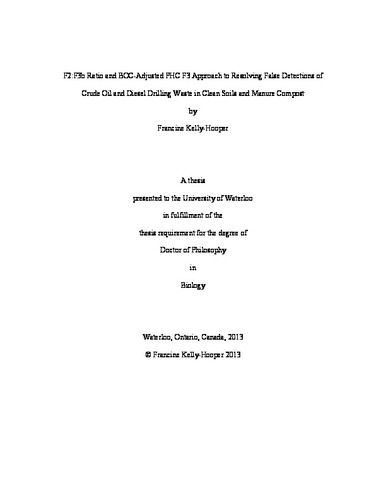 The Canadian Council of Ministers of the Environment (CCME) endorsed the Reference Method for the Canada-Wide Standard (CWS) for Petroleum Hydrocarbons (PHC) in Soil – Tier 1 Method in 2001. The purpose of the CWS is to provide laboratories with analytical methods for producing accurate and reproducible PHC soil chemistry analysis results. CWS PHC concentrations are reported according to the following carbon ranges/fractions: F1 (C6-C10), F2 (C10-C16), F3 (C16-C34) and F4 (>C34). The Canada-wide Standards for Petroleum Hydrocarbons (PHC) in Soil provide generic soil quality guidelines for the each of the four PHC fractions. The CWS PHC extraction solvents inadvertently co-extract natural biogenic organic compounds (BOC) from organic soils. BOCs, such as waxes and fatty acids, are produced by living organisms such as plants, animals and microbes. PHC analysis of highly organic clean soils and manure compost can cause false exceedences of the F3 soil quality guidelines. This thesis presents a new mathematical Tier 2 approach to resolving biogenic interferences through the use of biogenic versus petrogenic Gas Chromatography - Flame Ionization Detector (GC-FID) chromatogram patterns produced by the CWS PHC Tier 1 method. This approach is based on the results of four studies: i) 300-day crude oil contaminated peat and sand microcosm experiment; ii) 300-day diesel drilling waste contaminated manure compost and sand microcosm experiment; iii) PHC analysis of 14 light to heavy crude oils and iv) Canadian background PHC soil field survey. These studies determined that the clean soils and compost had F3 ranges that were dominated by the F3b sub-fraction range (C22-C34). In contrast, the F3a (C16-C22) and F3b sub-fraction ranges were evenly distributed in the 14 fresh light to heavy crude oils. The diesel drilling waste was strongly dominated by the F3a sub-fraction range. The second important trend was that F2 concentrations were either non-detectable or slightly detectable in all of the clean soils and compost samples. In contrast, F2 concentrations were strongly prevalent in all of the crude oils and in the diesel drilling waste. F2 and F3b concentrations were applied to the F2:F3b ratio, which identified PHC absence in the clean materials (<0.10 ratio) and PHC presence (>0.10 ratio) in the contaminated materials. The %F3a:%F3b distributions were applied to the BOC-adjusted PHC F3 calculation, which estimated true PHC F3 concentrations in the clean and contaminated soils and manure compost. The combination of these two approaches provided an accurate and efficient solution to resolving false detections of crude oil and diesel PHCs and false exceedences of F3 soil toxicity guidelines by in clean soils and compost.