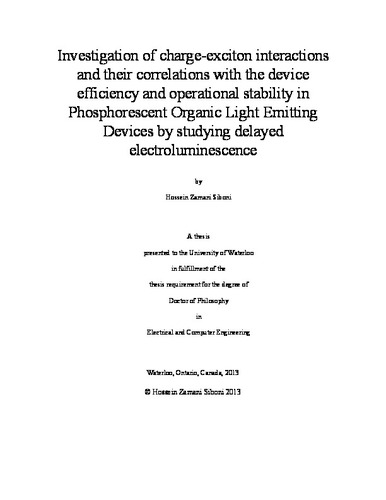 Phosphorescent OLEDs (PHOLEDs) have gained a lot of attention due to their remarkable capability of achieving nearly 100% internal quantum efficiency. Although PHOLEDs are a promising technology for the development of high performance display panels and low power consumption lighting sources, their poor operational stability and efficiency decline at high current density (efficiency roll-off) limit their commercialization. Unlike Fluorescent OLEDs (FOLED) in which singlet excitons are responsible for the device emission, PHOLEDs utilize both singlet and triplet excitons for the emission. However, triplet excitons have much longer lifetime than their counterparts and they can be quenched by two bimolecular interactions (i.e. Triplet-Triplet Annihilation (TTA) and Triplet-Polaron Quenching (TPQ)). These two processes are of particular interests in PHOLEDs, since they directly compete with the radiative relaxation of triplet excitons and therefore, they can considerably reduce the device efficiency. The overall interest of this thesis is to identify and investigate the physical phenomena associated with the efficiency roll-off and electroluminescence degradation in PHOLEDs. This work particularly focuses on understanding the underlying mechanisms associated with TTA and TPQ and their roles in the efficiency roll-off and electroluminescence degradation through the study of delayed electroluminescence. It is found that efficiency loss due to TPQ is mainly caused by charges within the bulk of the emission layer (EML) rather than by charges at the hole transport layer (HTL)/EML interface. Charges on the guest rather than those on the host are found to be the most efficient in quenching excitons, revealing that guest polaronic species are the most detrimental to device efficiency. In addition, recombination of electrons and holes on the host material generally leads to higher device efficiency in comparison to the case where recombination happens on the guest material. Although electron-hole recombination on the host tends to produce higher device efficiency, host e-h recombination is generally also associated with significant efficiency roll-off due to the quenching of the host triplet excitons primarily as a result of host-host TTA. Furthermore, results from the study of devices with various guest concentrations reveals that as the concentration of the guest molecules increases and the creation of host triplet excitons subsides (since most e-h recombination occurs on the guest) host-host TTA decreases, hence also the efficiency roll-off. In such case, quenching is mostly caused by polarons residing on guest sites. At optimum guest concentrations (~8 % Vol.), a balance between host e-h recombination and guest e-h recombination is reached, and thus also minimal TTA and TPQ. Based on the findings from the investigation of efficiency roll-off during short-term device operation, we extended our study to understand the mechanisms associated with the gradual efficiency loss in the devices during long-term operation. Two distinctive degradation mechanisms are observed in PHOLEDs, depending on whether the device contains a hole blocking layer (HBL) or not. For a device without a HBL, excess holes penetrate into the electron transport layer (ETL), and lead to the deterioration of the ETL adjacent to the interface of the emitting layer. The lower electron transport capacity of the degraded ETL alters the balance in hole/electron injection into the emitting layer, and results in a decrease in the luminescence efficiency of the PHOLEDs. For a device with a HBL, on the other hand, holes accumulate and become trapped in the emitting layer, and result in a decrease in the luminescence efficiency of the PHOLEDs, due to their role in acting as exciton quenchers or as non-radiative charge recombination centers. Furthermore, the results show a strong correlation between the extent of hole blockage capacity of the HBL and the deterioration in device EL efficiency, pointing to the major role that the build-up of hole space charges in the emitting layer plays in EL degradation. In this case, gradual increase of trapped charges in the EML enhances the TPQ process and hence exciton quenching manifesting as a reduction of TTA. In addition, gradual increase in driving voltage often observed with prolonged electrical driving of PHOLEDs is mainly governed by the accumulation of holes at this interface. Reducing the build-up of hole space charges in this region, for example, by means of eliminating guest molecules from the vicinity of the interface, leads to a significant improvement in the stability of PHOLED driving voltage.