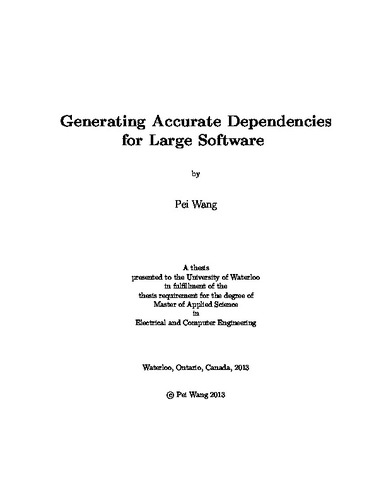 Dependencies between program elements can reflect the architecture, design, and implementation of a software project. According a industry report, intra- and inter-module dependencies can be a significant source of latent threats to software maintainability in long-term software development, especially when the software has millions of lines of code. This thesis introduces the design and implementation of an accurate and scalable analysis tool that extracts code dependencies from large C/C++ software projects. The tool analyzes both symbol-level and module-level dependencies of a software system and provides an utilization-based dependency model. The accurate dependencies generated by the tool can be provided as the input to other software analysis suits; the results along can help developers identify potential underutilized and inconsistent dependencies in the software. Such information points to potential refactoring opportunities and assists developers with large-scale refactoring tasks.