Imperial Transportation and Communication from the Third to the Late Fourth Century: The Golden Age of the cursus publicus 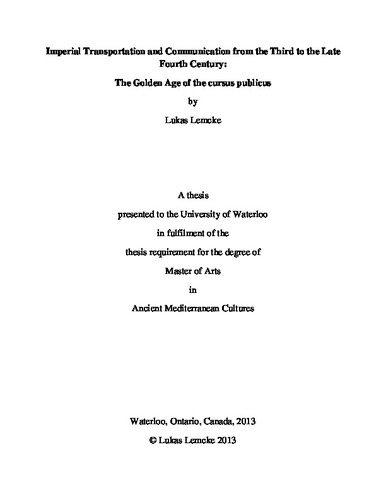 The existence of an infrastructure that allowed reliable communication between the emperors and all parts of the Roman civil and military administration was integral for the dissemination of ideologies, the promulgation of laws, and the implementation of Roman power in an organized and coherent fashion throughout the empire. This infrastructure was represented by the imperial information and transportation system (IITS, most commonly known by its 4th century name cursus publicus): a network of roadside stations set up in regular intervals along most major roads that could be used by officials of the central administration properly authorized with a permit. An integral aspect of Roman rule, the IITS has received relatively little attention in scholarship, particularly with regards to the question how structural and constitutional developments of the Roman Empire translated into changes to the communication system during the transition from the 3rd until the late 4th century. The aim of this thesis is twofold: after determining the ways in which the applications of the IITS changed over the course of the first three centuries CE on the basis of epigraphic evidence, the first part explores and explains factors that led to the creation of the cursus publicus with its two sub-divisions (cursus uelox, cursus clauulari(u)s) under Diocletian and Constantine through a comprehensive study of military, administrative, legal, and structural developments of the Roman Empire. The second part undertakes a comprehensive review of the structure, history, and development of the cursus publicus in the 4th century (e.g., infrastructure, financing, administration, usage rights, authorization, and control), primarily on the basis of a close reading of book 8.5 of the Theodosian Code. The evolution of the cursus publicus shows not only the interdependency between its development vis-à-vis that of the central administration, but also that the central government perceived it increasingly consciously as a valuable and important tool in ruling the empire. This thesis argues that on account of ongoing regulatory activity and reforms as a result of this shift in perception, the cursus publicus was firmly integrated into the imperial administration and streamlined to such a degree that it could be used with unprecedented effectiveness by the end of the 4th century.

Lukas Lemcke (2013). Imperial Transportation and Communication from the Third to the Late Fourth Century: The Golden Age of the cursus publicus. UWSpace. http://hdl.handle.net/10012/7870