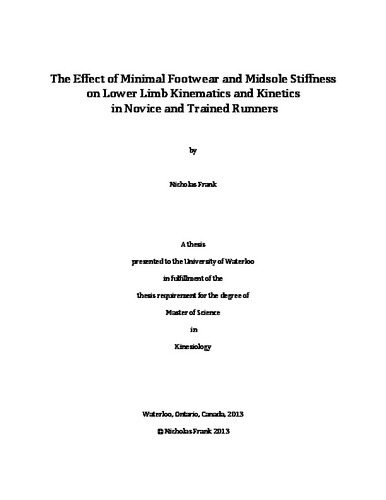 Background: The most common injuries in new or novice runners include medial tibial stress syndrome and patellofemoral pain syndrome; both overuse injuries. It is known that novice runners use a rearfoot strike pattern 98% of the time while running in traditional running footwear. Furthermore, footwear that is constructed with less cushioning (minimal shoes) and is said to promote forefoot running has increased in popularity. It is still unknown if novice runners convert their strike pattern in minimal shoes or continue to use a rearfoot strike pattern. Consequences of continuing to use a rearfoot strike pattern with less cushioning underfoot include higher vertical loading rates which are directly related to the types of injuries experienced. Aside from the strike pattern in a given shoe, movement stability is an important feature in healthy locomotion. There is a trade-off between being overly stable and being too unstable while running. It is known that the level of experience in running is related to the amount of stride length variability. It is still unknown if altering midsole stiffness has an effect on local dynamic stability while running. Purpose: The primary purpose of this thesis was to compare landing kinematics and kinetics between trained and novice runners in minimal and traditional shoes. The secondary purpose of this thesis was to examine the effect of running experience and midsole construction on local dynamic stability at the ankle, knee and hip. Methods: Twelve trained runners and twelve novice runners were recruited for participation. Four prototypical shoe conditions were tested with midsole geometry and material stiffness being manipulated. This yielded traditional/soft, traditional/hard, minimal/soft and minimal/hard shoe conditions. Participants ran down a 30m indoor runway which was instrumented with force platforms to measure vertical loading rates and motion capture cameras to capture landing kinematics. Participants also ran on a treadmill in each shoe condition to allow for local dynamic stability to be estimated at the ankle, knee and hip in the sagittal plane. Results: Novice runners landed with increased knee extension compared to trained runners. Increasing midsole thickness of the shoes caused an increase in dorsi-flexion of the ankle at heel strike. Manipulating material stiffness did not influence landing kinematics but did influence kinetics. Furthermore, decreasing material stiffness lowered vertical loading rates. Trained runners exhibited increased local dynamic stability (more stable) at the ankle, knee and hip compared to novice runners. Local dynamic stability was not affected by midsole stiffness. Conclusions: Novice runners did not alter their strike pattern in minimally constructed shoes. For this reason, cushioning properties of the shoe dictated vertical loading rates upon the body. Shoe conditions did not alter landing kinematics above the ankle, which is where the between group differences existed as novice runners landed with a more extended knee. Running experience appears to play a role in knee orientation at landing and is unaffected by shoe condition. Local dynamic stability was affected by running experience and does not appear to be related to the shoe condition being worn. Even when kinematics changed across shoe conditions, the stability of the movement did not.

Nicholas Frank (2013). The Effect of Minimal Footwear and Midsole Stiffness on Lower Limb Kinematics and Kinetics in Novice and Trained Runners. UWSpace. http://hdl.handle.net/10012/7867