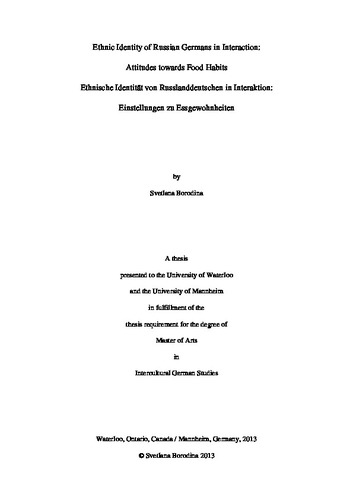 In this sociolinguistic study, qualitative interviews were used in examining discursive identity construction among Russian Germans. The interview group was composed of Russian German university students attending different universities in Germany. Based on the sociocultural perspective on language and identity, content analysis, turn-internal pragmatic and semantic as well as interactional approaches are used in the thesis. This thesis covers two major questions: What attitudes toward food Russian Germans construct during conversational interaction and what are the major linguistic resources and discursive strategies that these participants use to construct their cultural identities and how the attitudes towards the linguistic and social practices reflect German Russian identity and a particular Russian German space in German cities. The special situation of Russian Germans, that being the initial alienation in Russia due to their ethnic origin, followed by the attitude of local Germans towards Russian Germans after they relocated back to Germany, led to the situation where many of them feel to be in the position of ‘in-between’ (Kaiser 2006: 34). Due to the complexity of this special cultural position of Russian Germans, observations of how individuals negotiate Russian and German cultural spaces and construct their own space in everyday life provide insight to the research of cultural identity. At the same time, the creation of the Russian-German space by means of positioning also reveals the constructed identity of Russian Germans, which they create in discourse. The focus of the thesis lies on one particular practice, namely eating habits as a cultural practice. The analysis of food attitudes with the help of linguistic methods will contribute to the culture identity and the construction of a particular cultural space of Russian Germans. The interviews show how the attitudes towards food preferences and cooking habits serve as a basis for identity construction. By positioning themselves with the help of their attitudes towards eating habits, the participants create certain cultural spaces in German cities. Several domains of life such as private and public spheres, where the participants positioned themselves slightly differently from one another by drawing on different indexical meanings are covered in the interview. The work begins with the history of the Russian German migratory and studies made in relation to Russian Germans and their identity. It is followed by theoretical and methodological approaches. Content analysis, turn-internal pragmatic and semantic as well as interactional approaches are used in the thesis. The main body is devoted to the analysis of the qualitative interview data with the help of the theory and methodology described in the preceding section. In the end of the thesis the summary of the findings and the suggestions for the further research are presented.