Cyclical Violence in Jonglei State: The Deadly Shift in the Practice of Cattle Raiding 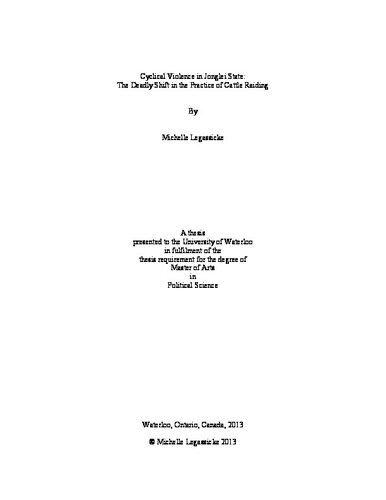 One of the greatest post-conflict problems in South Sudan, which has emerged as a threat to the nation’s security, has been the deadly clashes between tribes during cattle raids. This thesis examines why cattle raiding shifted from a relatively non-violent rite of passage to the primary manifestation of tribal conflict in South Sudan, and whether it is possible to reverse this shift. This thesis proposes a unique approach to the topic by analyzing two underlying causes: insecurity in Jonglei State and a breakdown of traditional governance structures – as well as how their combination has led to the shift. This thesis focuses on a case study of Jonglei State, as it has experienced the largest number of instances of conflict attributed to cattle raiding in South Sudan. Furthermore, current attempts to reduce conflict through increased security and disarmament, demobilization, and reintegration programs have failed as they only address problems of insecurity. I will be comparing two periods of cattle raiding in Jonglei: the current conflict from 2009 until the present, and a historical review of cattle raids focusing on governance of the raids. The review will not cover any specific time period as it aims to identify what aspects of the tradition contributed to a reduced scale of violence before the shift in 2009. Insecurity has caused the increase in clashes, while disconnections to traditions have caused the increase in violence. To address these problems, traditional leadership structures and the de facto rules that structured raids must be re-established in order to produce a long-term solution.