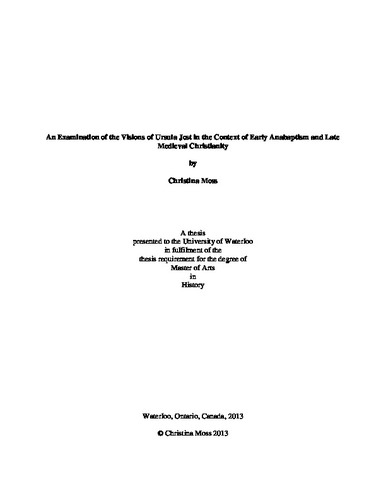 In early 1530, the lay preacher and recent Anabaptist convert Melchior Hoffman published a series of seventy-seven visions by the Strasbourg butcher’s wife Ursula Jost. In its own day this series of visions, which is the longest extant sixteenth-century document written from the perspective of an Anabaptist woman, attracted the attention of Strasbourg’s authorities and became popular among Dutch Anabaptists who followed Hoffman. In the twentieth century the visions have been studied by Klaus Deppermann and Lois Barrett, who came to widely diverging conclusions on Ursula’s values and her place in the Anabaptist movement. Deppermann saw her as an angry, even bloodthirsty woman whose visions revealed “a murderous hatred of existing society” and inspired violent actions of the part of other Anabaptists, while Barrett argued that Ursula’s visions reflected “the Anabaptist-Mennonite ethic of establishing the reign of God nonviolently.” In light of the radically different conclusions reached by Deppermann and Barrett, this study conducts a fresh re-examination of the visions of Ursula Jost in order to determine what Ursula’s example reveals about sixteenth-century Anabaptism. It investigates her relationship to her own city of Strasbourg, the broader Anabaptist movement in the sixteenth century, and the breadth of the late medieval religious tradition in which Ursula and her contemporaries were raised. Contra Barrett’s claim that Ursula’s visions uphold a nonviolent Anabaptist-Mennonite ethic, this study argues that, while Ursula belongs to the Anabaptist tradition, she does not belong to the Mennonite tradition. Instead, her example illustrates the diversity and heterogeneity of the first Anabaptists in contrast to the relative homogeneity of the Hutterite, Mennonite, and Swiss Brethren traditions that survived past the mid-sixteenth century, as well as the indebtedness of the Anabaptist religious tradition to the late medieval religious tradition that preceded it.

Christina Moss (2013). An Examination of the Visions of Ursula Jost in the Context of Early Anabaptism and Late Medieval Christianity. UWSpace. http://hdl.handle.net/10012/7863