A Framework to Simulate and Improve Terahertz Quantum Well Photodetectors 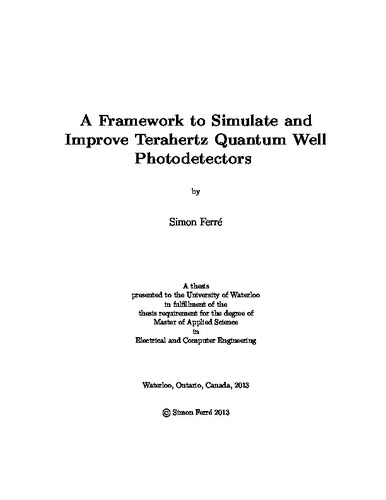 A wide range of applications have been recognized for terahertz radiations. In fact, medical imaging, homeland security screening, very high-speed wireless telecommunications systems and even drug and gas detection are boosting the development of terahertz emitters and receivers. The work of this thesis is among the efforts in that regard. Actual terahertz detectors are suffering many drawbacks, they are bulky, very slow, not very sensitive or operates at non-practical temperatures. Combined with the complexity to realize terahertz emitters, it explains the difficulties of terahertz radiations to ensure market penetration with practicable civil applications. In that regard, we aim to better understand and improve a specific terahertz photodetector: the Terahertz Quantum Well Photodetector. Those devices working principle relies on a photocurrent created by the excitation of electrons from ground states of quantum wells to the continuum under terahertz impinging light. The intensity of the photocurrent is depending on the intensity of the radiation received by the device. The device active region is made of a multiple quantum wells GaAs/AlGaAs system. By changing the design of the device, that is the thicknesses of each layer, the aluminum fraction of the doping concentration, we can modify its performances. Documented and commented Matlab functions and routines have been implemented in order to simulate a given structure and scripts have been written to find the optimum parameters for a target absorption frequency. Our model has been verified by comparison with experimental data reported in the literature. Based on our model, we systematically study the impact of the active region and contact parameters on the device performances. In addition, innovative designs are proposed in order to reduce the undesirable dark current and thus increase the detectivity. They benefits from many-body effects, effects that are usually a constraint on the design. To our knowledge this is the first time those effects are used to realize innovative designs and increase the performances of quantum well infrared photodetectors. Finally we expose other designs that have been tested in the infrared domain with QWIP and adapt them to the terahertz range. In particular, we propose a quantum cascade photodetector, a double barrier bound-to-miniband and a phonon-assisted band to miniband structures.