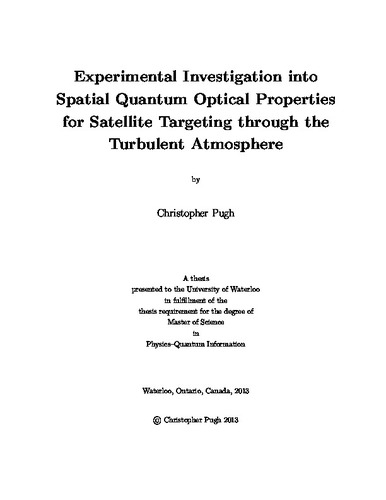 A major field of research at the current time is that of implementing Quantum Key Distribution over large distances using satellites. If this protocol works with this technology, it will have huge implications on future information security. In order for a satellite to implement this idea, there are many aspects that must be taken into account. One of the big issues that comes up for this type of system is that of propagating light through the turbulent atmosphere and its effects on the acquisition, pointing and tracking system. The projects studied in this thesis study some of the effects of the atmosphere on certain detectors, try to develop pointing schemes for better accuracy as well as develop knowledge in free space propagation of other single photon experiments. In the first experiment, I study the spatial correlations of the daughter photons created in spontaneous parametric down conversion. I look at the effect of altering the pump beam on the positions of the down converted photons and see if the pump can be manipulated in a way to control the directions of the daughter photons. I begin to utilize a deformable mirror and Shack-Hartmann wavefront sensor which are generally used in adaptive optics, but we plan to use them to alter the pump beam in the spontaneous parametric down conversion process to analyze the correlations between the pump and down converted photons. The second experiment investigates the effects of laser scintillation on the performance of a possible tracking device that could be implemented on a satellite. This quad sensor tracks the position of a beam and a system will be developed to move the sensor to keep the beam in the center where there is a hole for the quantum single photons to stream through. In order to create the effects of scintillation, a turbulence simulator box was built and characterized. This box combines wind turbulence with a heat gradient to mimic atmospheric turbulence on a small scale. Finally, my contributions to a large scale, long distance free space quantum optics experiment are explained and the overall goal of the experiment is discussed. This experiment exposed me to actual free space transmission issues as well as many fundamental techniques for performing long distance optics experiments. In this experiment there was no correction for atmospheric turbulence, but in the future, techniques could be implemented which might increase the efficiencies of the free space links.