Dionysian Semiotics: Myco-Dendrolatry and Other Shamanic Motifs in the Myths and Rituals of the Phrygian Mother 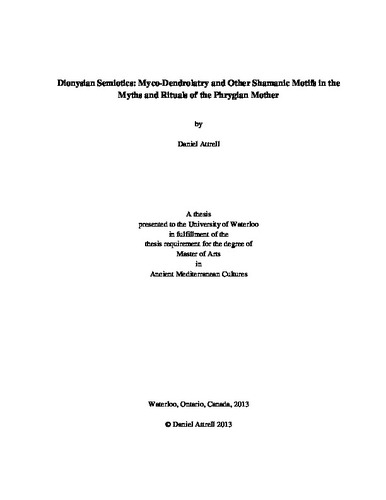 The administration of initiation rites by an ecstatic specialist, now known to western scholarship by the general designation of ‘shaman’, has proven to be one of humanity’s oldest, most widespread, and continuous magico-religious traditions. At the heart of their initiatory rituals lay an ordeal – a metaphysical journey - almost ubiquitously brought on by the effects of a life-changing hallucinogenic drug experience. To guide their initiates, these shaman worked with a repertoire of locally acquired instruments, costumes, dances, and ecstasy-inducing substances. Among past Mediterranean cultures, Semitic and Indo-European, these sorts of initiation rites were vital to society’s spiritual well-being. It was, however, the mystery schools of antiquity – organizations founded upon conserving the secrets of plant-lore, astrology, theurgy and mystical philosophy – which satisfied the role of the shaman in Greco-Roman society. The rites they delivered to the common individual were a form of ritualized ecstasy and they provided an orderly context for religiously-oriented intoxication. In the eastern Mediterranean, these ecstatic cults were most often held in honour of a great mother goddess and her perennially dying-and-rising consort. The goddess’ religious dramas enacted in cultic ritual stressed the importance of fasting, drumming, trance-inducing music, self-mutilation, and a non-alcoholic ritual intoxication. Far and wide the dying consort worshiped by these cults was a god of vegetation, ecstasy, revelation, and salvation; by ingesting his body initiates underwent a profound mystical experience. From what limited information has survived from antiquity, it appears that the rites practiced in the eastern mystery cults were in essence traditional shamanic ordeals remodeled to suit the psychological needs of Mediterranean civilization’s marginalized people. This paper argues that the myths of this vegetable god, so-called ‘the Divine Bridegroom,’ particularly in manifestation of the Phrygian Attis and the Greek Dionysus, is deeply rooted in the life-cycle, cultivation, treatment, consumption of a tree-born hallucinogenic mushroom, Amanita muscaria. The use of this mushroom is alive and well today among Finno-Ugric shaman and this paper explores their practices as one branch of Eurasian shamanism running parallel to, albeit in a different time, the rites of the Phrygian goddess. Using extant literary and linguistic evidence, I compare the initiatory cults long-assimilated into post-agricultural Mediterranean civilization with the hallucinogen-wielding shaman of the Russian steppe, emphasizing them both as facets of a prehistoric and pan-human magico-religious archetype.

Daniel Attrell (2013). Dionysian Semiotics: Myco-Dendrolatry and Other Shamanic Motifs in the Myths and Rituals of the Phrygian Mother. UWSpace. http://hdl.handle.net/10012/7857