Measuring the Environmental Dependence of Galaxy Haloes with Weak Lensing 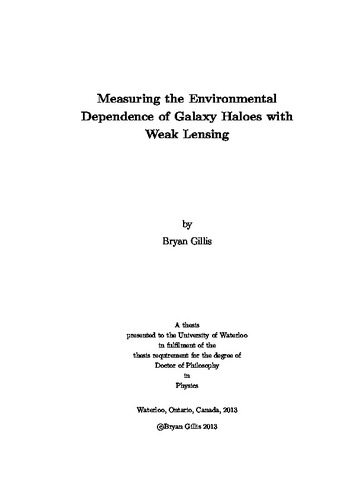 We investigate the uses of gravitational lensing for analysing the dark matter haloes around galaxies, comparing galaxies within groups and clusters to those in the field. We consider two cases: when only photometric redshift data is available, and when spectroscopic redshift data is available for a sufficiently large sample of galaxies. For the case of data with photometric redshifts, we analyse the CFHTLenS dataset. This dataset is derived from the CFHTLS-Wide survey, and encompasses 154 deg^2 of high-quality shape data. Using the photometric redshifts to estimate local density, we divide the sample of lens galaxies with stellar masses in the range 10^9 Msun to 10^10.5 Msun into those likely to lie in high-density environments (HDE) and those likely to lie in low-density environments (LDE). Through comparison with galaxy catalogues extracted from the Millennium Simulation, we show that the sample of HDE galaxies should primarily (~61%) consist of satellite galaxies in groups, while the sample of LDE galaxies should consist of mostly (~87%) non-satellite (field and central) galaxies. Comparing the lensing signals around samples of HDE and LDE galaxies matched in stellar mass, we show that the subhaloes of HDE galaxies are less massive than those around LDE galaxies by a factor 0.65+/-0.12, significant at the 2.9 sigma level. A natural explanation is that the haloes of satellite galaxies are stripped through tidal effects in the group environment. Our results are consistent with a typical tidal truncation radius of ~40 kpc. For the case of data with spectroscopic redshifts, we analyse the GAMA-I and the ongoing GAMA-II surveys. We demonstrate the possibility of detecting tidal stripping of dark matter subhaloes within galaxy groups using weak gravitational lensing. We have run ray-tracing simulations on galaxy catalogues from the Millennium Simulation to generate mock shape catalogues. The ray-tracing catalogues assume a halo model for galaxies and groups, using various models with different distributions of mass between galaxy and group haloes to simulate different stages of group evolution. Using these mock catalogues, we forecast the lensing signals that will be detected around galaxy groups and satellite galaxies, as well as test two different methods for isolating the satellites' lensing signals. A key challenge is to determine the accuracy to which group centres can be identified. We show that with current and ongoing surveys, it will possible to detect stripping in groups of mass 10^12 Msun to 10^15 Msun.