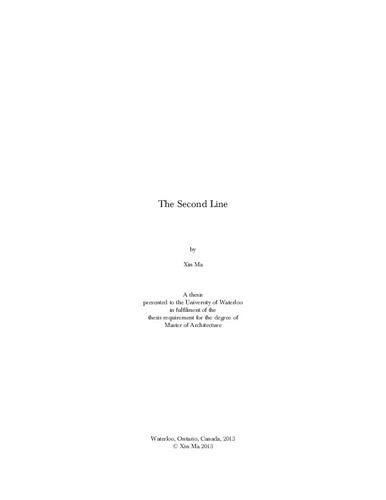 A political boundary divided the City of Shenzhen in 1978. The southern portion is designated as a Special Economic Zone (SEZ), while the northern region remains a part of hinterland China. The divide creates a geographical and psychological chasm in the administrative and ontological existence of Shenzhen. The locals dubbed this border “the Second Line”. The Second Line and SEZ were a part of Chairman Deng Xiaoping’s open and reform economic policies in 1978. The SEZs were designated areas along the southeast coast of China for the socialist state’s experimentation with global capitalism. After years of wars, revolution and repression of the individual pursuit of capital, Shenzhen underwent extraordinary urban and economic development, growing from clusters of villages holding 300 000 residents to a megalopolis of more than a million in one decade. The Second Line drove uneven urban and economic growth in the Shenzhen SEZ. The radical speed of development and opportunities brought workers from rural areas of China. They made up the economic and urban substructure of the city, but were excluded from urban social welfare. Shenzhen’s industries rooted in instability and disposability of labour discouraged the settlement of the floating population. The thesis proposal conceptually commemorates the site of the Second Line, and pays homage to its crucial role in the urban and economic formation of Shenzhen. At the urban scale, it acts as a public infrastructure, providing a framework for interface between the segregated territories of the city. The social housing component of the proposal is an architectural response and challenge to policies that allow for the migration of rural workers without provisions for everyday life. The proposal subverts the divisive ideology of the boundary through inhabitation, and creates a space of dwelling on the Second Line.