Novel radiation sensors based on bio/nanomaterials 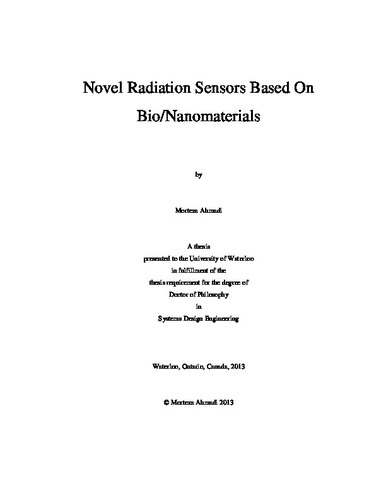 X-ray sensors are essential to many applications which are not limited to diagnostics and imaging technologies. Such sensors are extensively used in industry, medicine, research and space technology for applications such as safety, security, quality control, imaging and treatment. Depending on the effect of the radiation on the matter employed in the sensor, different types of X-ray sensors are fabricated. However, available techniques of X-ray detection have been under development due to specific shortcomings such as finite life time, low sensitivity, and post-processing requirements. This thesis is focused on design, fabrication and characterization of novel radiation sensors based on bio/nanomaterials. Bacteriorhodopsin (BR), a proton pump protein in the cell membrane of Halobacterium Salinarum, has been used to fabricate a sensor to measure dose and dose rate of X-ray beam in the kilovoltage and megavoltage energy range. The mass attenuation coefficients, effective atomic numbers and electron densities of BR and its comprising amino acids have been calculated for 1 keV-100 GeV photons to better understand the interaction of BR with X-ray photons. A theoretical formulation for calculating the change in the conductivity of nanoparticles under radiation is also provided. In particular, the dependence of radiation induced conductivity to irradiated particle size is given. In addition to that, an X-ray sensor based on thin film of bismuth sulfide has been fabricated using laser micromachining and chemical deposition techniques. This sensor has been characterized under a diagnostic X-ray machine with kilovoltage energy beam.