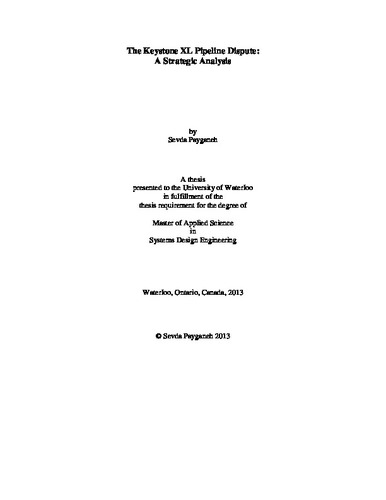 TransCanada Corporation has proposed the Keystone XL pipeline project to transfer crude bitumen from the oil sand fields in northern Alberta, Canada, to oil refineries located in the southern part of the United States. This project has created controversy at the national level in the US and Canada and at the international level. The existence of various stakeholders with differing wants and needs has embroiled the Keystone XL in a complicated strategic dispute. This dispute was initially ignited by the potential project’s negative environmental impacts. However, economic and political issues have also played a critical role in further complicating the decision process. The objective of this study is to design a strategic decision-making system for use in assessing the Keystone XL conflict with standard and perceptual graph model methods. Standard graph model analysis consists of various steps. After identifying the decision makers (DMs) subjectively, their options and preferences are determined. Then, possible scenarios or combinations of options for these DMs are evaluated. In the next step, based on rules called solution concepts, a standard stability analysis is conducted. The perceptual graph model technique, on the other hand, considers the emotions and perceptions of DMs in a conflict to assess the existing dynamics among them. Although this technique takes its basic structure from the standard graph model technique, it presents unique insights into each DM’s perspectives toward the conflict and other DMs. This technique has been used in this study to understand how the awareness of one DM regarding other DMs’ perceptions can change reactions and strategies under different conditions regarding the Keystone XL conflict.