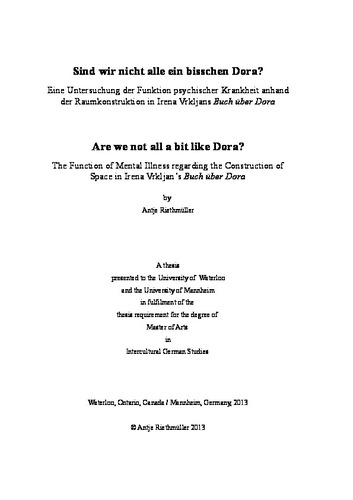 We often encounter mental illness in our daily lives. People who are diagnosed with a mental disorder are marked as different and thereby stigmatized and confined to spacial isolation. This thesis analyzes the function of mental illness by examining the protagonist of Irena Vrkljan's Buch über Dora. I argue that in Buch über Dora stigmatization and isolation of otherness becomes visible in how the book's protagonist is excluded from certain spaces. My main question is which role is ascribed to Dora by society. Othering – and therefore excluding – mentally ill persons such as Dora is necessary to establish the order of society. Another important issue are the similarities between Dora and other female characters in the novel.The symptoms of the pressure to succumb to societal norms are shared by the first person narrator, among others. It is my aim to show that and how all woman can easily be pushed into Dora's role. This leads to the central question or my thesis: Are we not all a bit like Dora? To date, Irena Vrkljan's works have been largely neglected by the germanic academic community. Germanistik has not yet found a way to accommodate her bilingual and bicultural oeuvre. The first part of my thesis addresses this issue. The second part develops a constructivist theoretical framework for my analysis of space. First, I draw on the work of Michel Foucault "Of Other Spaces", "Discipline And Punish", and "Madness And Cilvilization", in which he describes space as a construct that reproduces societal norms. Second, Sigmund Freud's "Fragments of an Analysis of a Case of Hysteria" helps to grasp how mental illness is pathologized. While Foucault focuses on the function of norms, Freud analyses the consequences of aberrant behaviour for women. The third part focuses on the fragmentary structure of the novel and continues with an detailed analysis of heterotopias such as the cemetery, Dora's room, the market and the untended park. By identifying with Dora, Buch über Dora questions the norms and shows her otherness as something that we all share. She may be stigmatized as mentally ill but she is by no means fundamentally different to other women.