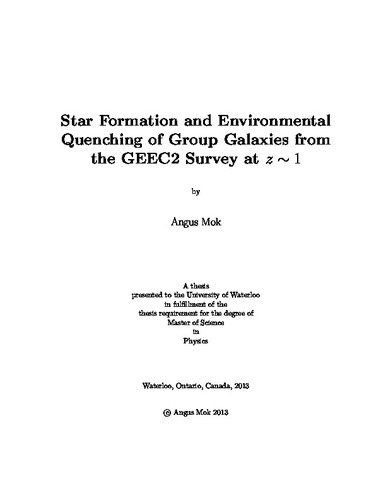 This work presents detailed analysis from the GEEC2 spectroscopic survey of galaxy groups at 0.8<z<1. This deep survey, which has a magnitude limit of r_AB<24.75, had previously found a population of intermediate ('green') galaxies between the star-forming ('blue') and quiescent ('red') sequences. GMOS-S spectroscopy for the 11 X-ray selected galaxy groups was obtained and is highly complete ( > 66 per cent) for eight of the eleven groups. Using an optical-NIR colour-colour diagram, the galaxies in the sample are separated with a dust insensitive method into the three categories, star-forming, quiescent, and intermediate. The strongest environmental dependence is observed in the fraction of quiescent galaxies, which is higher inside groups than in the field for all stellar masses. While intermediate galaxies represent ~15-20 per cent of the star-forming population in both the group and field, the average specific star formation rates (sSFR) of the group population is lower by a factor of ~3. The intermediate population also does not show the strong Hδ absorption that is characteristic of starburst galaxies. Inside groups, only 4.4-6.7 per cent of star-forming galaxies are starbursts, which gives additional validity to the assumption that the quenching of star-formation is the primary process in the transition from the star-forming to the quiescent state. With the use of stellar synthesis models, two possible scenarios for the origins of the intermediate population are investigated, including the quenching of star-forming galaxies via environmental processes and the rejuvenation of star formation in early-type galaxies via mixed mergers. To model the quenching scenario, we have tested the use of different exponential quenching timescales (τ_2) and different types of delays between satellite accretion and the onset of quenching. We found that the fraction of intermediate galaxies depends most strongly on the value of τ_2. The relative fractions of galaxies rule out both the no-delay scenario, which would require a long τ_2 that over-produces intermediate galaxies, as well as the constant 3 Gyr delay model, which does not produce a sufficient number of quiescent galaxies. The observed fractions are best matched with a model that includes a dynamical delay time and a τ_2=0.25 Gyr, but this model also predicts intermediate galaxies Hδ strength higher than that observed. For the rejuvenation scenario, we found that the time visible in the intermediate region is directly related to the size of the second 'burst' of star-formation, which can then be further constrained by the Hδ strength for the intermediate population. The observations are best matched to a burst size of ~1 per cent, at a rate of ~3 times per Gyr. In order to properly distinguish between the two scenarios, we will need to both increase the signal-to-noise ratio for the Hδ measurements and conduct a deeper survey of satellite galaxies both inside groups and in the field.