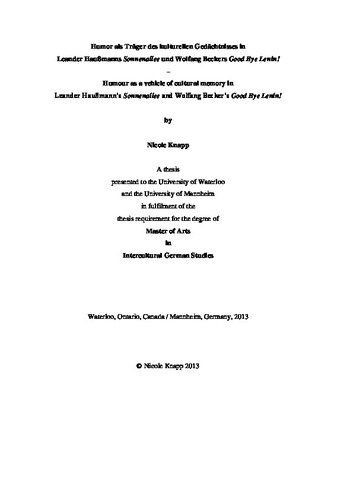 The main interest of this thesis lies in the analysis of the German Democratic Republic (GDR), as it is represented in movies. The times before and after the Cold War period in Germany have often been discussed in both literature as well as movies. However, most academic essays which focus on how this time is remembered by current societies are analyzing literature rather than movies. Most analyses of film neglect the exploration of cultural memory, even though there are a variety of different film genres that deal with this topic. This paper will fill this gap in film research by showing that movies set in the GDR can help to convey a cultural memory just as much as literature. The diversity of movies set in the GDR is great: many movies tell sad and serious stories about families under government surveillance, or of people who were killed by trying to escape to West-Germany. This thesis however, focuses on films with humorous aspects. Although most film reviewers criticise comedies about the GDR as being purely nostalgic, this thesis shows that the humour used in specific movies is able to collect a memory and therefore, can be seen as a vehicle of cultural memory. The movies Sonnenallee directed by Leander Haußmann and Good Bye Lenin! directed by Wolfgang Becker are analyzed in this paper because they are comparable insofar that they both show the GDR from a youthful point of view from different time periods. Sonnenallee takes place in the 70ies and therefore, 20 years before the fall of the Berlin Wall. Good Bye Lenin?, in contrast, covers both the time before and after the fall of the wall. Another reason for selecting these movies is the fact that they are criticized for only portraying the clichés and stereotypes of East-German-figures, which should be reproved. The first part of the thesis explains the theory and main arguments of Aleida and Jan Assmann’s concept of cultural memory. In order to reconstruct their train of thought, it is necessary to summarize the work of their predecessors Maurice Halbwachs, Aby Warburg, and Pierre Nora. The second part moves on to discuss the term ‘Erinnerungs-film’, coined by Astrid Erll, whose main research interest lies in understanding the dif-ferent kinds of memories occurring in movies. The following chapter focuses on the use of comedy in the selected films, as it is important to understand how humorous scenes are created in those movies. The main part of the thesis is the analysis of Sonnenallee and Good Bye Lenin! found in chapter five. Two different types of approaches are chosen: first, a comparison between Haußmann’s movie Sonnenallee and Thomas Brussig’s book Am kürzeren Ende der Sonnenallee, and then a picture-sound-analysis of selected scenes from Becker’s movie Good bye Lenin!. The comparison shows the advantages that the movie has over the book in terms of displaying humour as a means to convey cultural memory. The inter-pretation part of the thesis shows how funny scenes can be critically interpreted and found to be useful in creating cultural memory rather than putting them down as purely nostalgic.