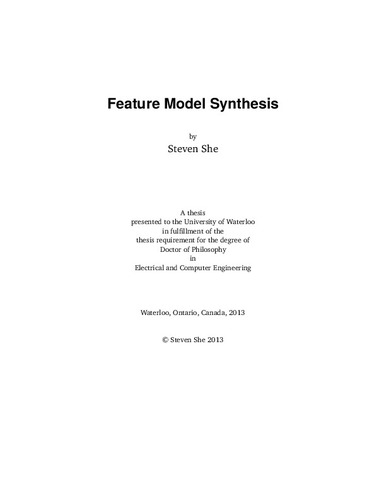 Variability provides the ability to adapt and customize a software system's artifacts for a particular context or circumstance. Variability enables code reuse, but its mechanisms are often tangled within a software artifact or scattered over multiple artifacts. This makes the system harder to maintain for developers, and harder to understand for users that configure the software. Feature models provide a centralized source for describing the variability in a software system. A feature model consists of a hierarchy of features—the common and variable system characteristics—with constraints between features. Constructing a feature model, however, is a arduous and time-consuming manual process. We developed two techniques for feature model synthesis. The first, Feature-Graph-Extraction, is an automated algorithm for extracting a feature graph from a propositional formula in either conjunctive normal form (CNF), or disjunctive normal form (DNF). A feature graph describes all feature diagrams that are complete with respect to the input. We evaluated our algorithms against related synthesis algorithms and found that our CNF variant was significantly faster than the previous comparable technique, and the DNF algorithm performed similarly to a comparable, but newer technique, with the exception of several models where our algorithm was faster. The second, Feature-Tree-Synthesis, is a semi-automated technique for building a feature model given a feature graph. This technique uses both logical constraints and text to address the most challenging part of feature model synthesis—constructing the feature hierarchy—by ranking potential parents of a feature with a textual similarity heuristic. We found that the procedure effectively reduced a modeler's choices from thousands, to five or less when synthesizing the Linux and eCos variability models. Our third contribution is the analysis of Kconfig—a language similar to feature modeling used to specify the variability model of the Linux kernel. While large feature models are reportedly used in industry, these models have not been available to the research community for benchmarking feature model analysis and synthesis techniques. We compare Kconfig to feature modeling, reverse engineer formal semantics, and translate 12 open-source Kconfig models—including the Linux model with over 6000 features—to propositional logic.