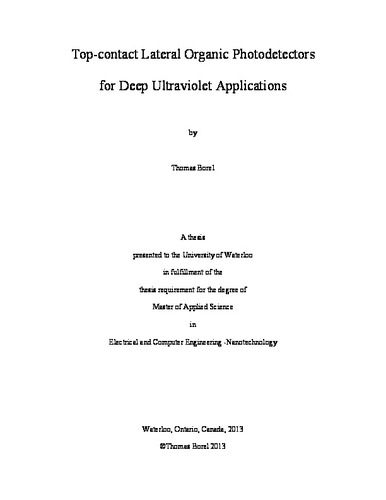 Organic semiconductors are very attractive for thin film Organic Photodetectors (OPDs) since they possess a number of desirable attributes for optical sensing including high absorption coefficients over visible and ultraviolet wavelengths and compatibility with large-area deposition processes such as ink-jet, screen printing, and solution processing. OPDs, in general, utilize a vertical device architecture where the photoactive organic semiconductor layers are sandwiched between top and bottom electrodes that provide electrical contact. More recently, an interest in utilizing a lateral device architecture instead of the vertical one, has emerged. In this architecture, the two contacts are positioned on the two sides of the photoactive material with respect to the direction of the incoming signal, separated by a small gap. However, the factors governing lateral OPDs’ photo-response are still not well understood. In this thesis, we fabricate top-contact lateral OPDs using a thermal evaporation only fabrication process. We study the factors governing both the dark and photo currents of lateral OPDs. The effect of the wide gap between the two electrodes on the current-voltage characteristics is discussed and the role of space charge limited conduction is investigated. The contributions in the photoresponse of light scattering through the active layers as well as the back reflection of light at the metallic contacts are emphasized. The reproducibility over repeated operation cycles of both dark and photo currents values is explored. Exposure to light of the lateral OPD is found to lead to a significant increase in the dark current. The role of the conductivity enhancement in the channel due to light-induced trap filling is investigated. External quantum efficiency and detectivity estimates are given for deep ultraviolet lateral (DUV) OPDs. A comparison with vertical DUV OPDs performances is provided. Finally, the use of a phosphorescent sensitizer doped in the absorbing bottom layer to improve top-contact lateral OPDs efficiency is discussed.