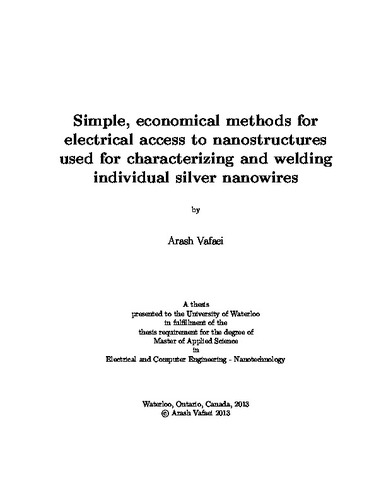 Elongated nanostructures have attracted a great deal of interest due to unique optical, electrical and physical properties. In particular, silver nanowires and nanobeams have proven to be top contenders for a variety of applications. Due to their nano-sized dimensions, however, electrical access to individual nanowires is difficult and expensive. Here, a simple and economical procedure was designed to electrically contact small elongated structures using common facilities available at most universities. A common lithographic procedure is used to pattern gold pads and electrodes on top of nanowires already dispersed on a substrate. This process is tested by first characterizing, using a 4-point-probe measurement, a novel nanobeam created by fusing silver nanodisks. The resistivity of the nanobeams was found to be as low as 2.7x10^−8 Ω·m, which is only slightly above that of bulk silver. These measurements corroborate modeling done by another group that the nanodisks align to create a nearly continuous crystal rather than disjointed grains. In the second application, Joule-heating was used to actualize a reliable weld between silver nanowires synthesized using the polyol method. The nanowires were situated in series between two metal pads, and a procedure was designed to use electrical current to break down intermediate layers without destroying the nanowires themselves. In the last enterprise, individual silver nanowires were isolated between two gold pads and then using the same electrical recipe used for welding nanowires, the contact resistance was reduced to a negligible portion of its original value. It was found that due to the reduction in contact resistance, the 2-point-probe resistivity of the nanowire was similar to those conducted using 4 probes. The invented procedure can thus allow accurate resistivity measurements of individual metal nanowires to be done with only 2 contacts rather than 4, thereby simplifying contact fabrication and allowing appropriate contacts to be deposited on nanowires as short as 4 μm using standard photolithography.