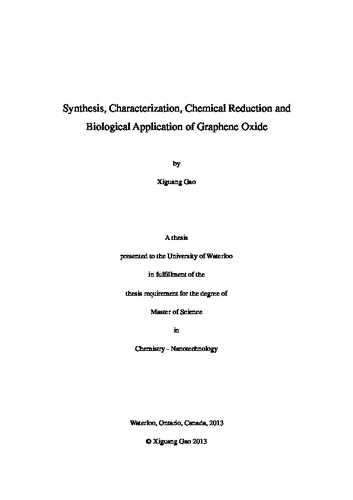 As an atomic layer of sp2-hybridized carbon atoms closely packed in a honeycomb lattice, graphene has been attracting increasing attention since its discovery in 2004 due to its extraordinary physicochemical properties. Graphene oxide (GO), a non-stoichiometric graphene derivative with the carbon plane abundantly decorated with hydroxyl, epoxide and carboxylic groups, can be massively and cost-effectively produced from natural graphite following Hummers method. GO has greater aqueous solubility than pristine graphene due to its oxygen-functionalities. Various solution-based chemical methods can be applied to GO, which has stimulated a new research area called ‘wet chemistry of grahene’. Among them, chemical reduction of GO provides a facile route for large-scale synthesis of graphene. With abundant oxygen-functionalities in its structure, GO can potentially act as a suitable precursor for chemical modifications of graphene through methods used in organic chemistry. Special attention should be paid to that the hydroxyl groups in GO belong to tertiary alcohols, and steric hindrance should be considered when performing chemical modifications. Diethylaminosulfur trifluoride (DAST), a fluorinating reagent, is ineffective in fluorinating GO due to the steric hindrance of tertiary hydroxyls. However, DAST is effective in reducing GO. The capability of DAST for GO reduction is close to hydrazine, but the reduction reaction can be performed at lower temperature for DAST. As a two-dimensional (2D) nanomaterial with good aqueous solubility, biocompatibility and excellent intrinsic mechanical properties, GO is particularly useful in preparing 3D hybrid hydrogel scaffolds for tissue engineering applications.