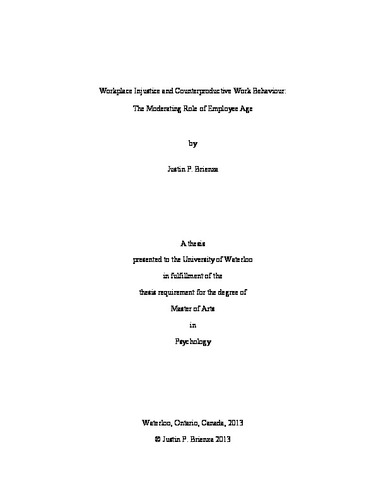 Drawing on prior research from several areas of psychology, I predicted that different forms of organizational justice would predict counterproductive work behaviour (CWB) depending on employees’ age. In particular, I predicted that distributive justice would be associated with CWB more so for younger than older employees, whereas interactional justice would be associated with CWB more so for older than younger employees. In an initial study, 192 employees completed an online survey which assessed the focal variables. Hierarchical regression analysis revealed the two predicted 2-way interactions. The findings are in line with aging research suggesting that, whereas younger people are more motivated by instrumental concerns, relational concerns become more salient as they age. The results have important implications for research on justice and CWB, and they extend basic research on human aging to an applied context.