By me, for me: Acquiring ownership through creation 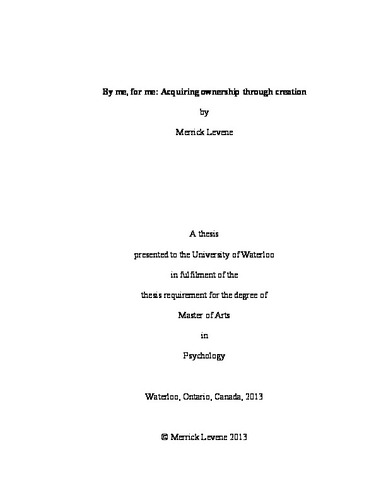 Previous research has shown that people’s judgments about who owns an object depend on the amount and type of labor involved in acquiring it. While informative about the influence of labor on the acquisition of existing objects, little is known about how ownership judgments are made for objects that are created out of non-owned materials. The current studies investigated whether people judge that creation confers ownership, and how an agent’s intent influences people’s ownership judgments. Experiment 1 revealed that people view creation as conferring ownership, but that ownership is not established when an agent’s attempt to create fails. Experiment 2 revealed that creators own objects that they create intentionally, but not objects that they create without intent. Experiment 3 revealed that people consider true creation to be the result of intentional actions, and that those responsible for true creation are granted ownership at higher rates than those viewed as only having modified an existing object. The similar pattern of responses in previous research about labor involving acquiring objects and the current research on labor involving creating objects suggests that a general notion of labor could underlie people’s ownership judgments.