Variations on a Theme: Graph Homomorphisms 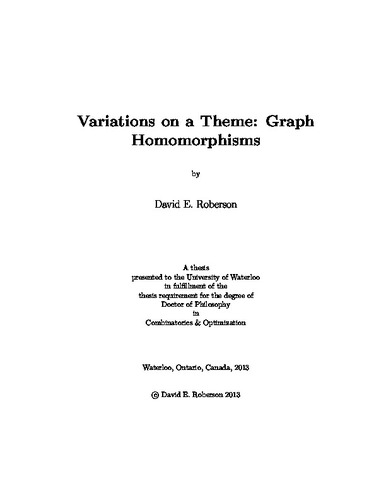 This thesis investigates three areas of the theory of graph homomorphisms: cores of graphs, the homomorphism order, and quantum homomorphisms. A core of a graph X is a vertex minimal subgraph to which X admits a homomorphism. Hahn and Tardif have shown that, for vertex transitive graphs, the size of the core must divide the size of the graph. This motivates the following question: when can the vertex set of a vertex transitive graph be partitioned into sets which each induce a copy of its core? We show that normal Cayley graphs and vertex transitive graphs with cores half their size always admit such partitions. We also show that the vertex sets of vertex transitive graphs with cores less than half their size do not, in general, have such partitions. Next we examine the restriction of the homomorphism order of graphs to line graphs. Our main focus is in comparing this restriction to the whole order. The primary tool we use in our investigation is that, as a consequence of Vizing's theorem, this partial order can be partitioned into intervals which can then be studied independently. We denote the line graph of X by L(X). We show that for all n ≥ 2, for any line graph Y strictly greater than the complete graph Kₙ, there exists a line graph X sitting strictly between Kₙ and Y. In contrast, we prove that there does not exist any connected line graph which sits strictly between L(Kₙ) and Kₙ, for n odd. We refer to this property as being ``n-maximal", and we show that any such line graph must be a core and the line graph of a regular graph of degree n. Finally, we introduce quantum homomorphisms as a generalization of, and framework for, quantum colorings. Using quantum homomorphisms, we are able to define several other quantum parameters in addition to the previously defined quantum chromatic number. We also define two other parameters, projective rank and projective packing number, which satisfy a reciprocal relationship similar to that of fractional chromatic number and independence number, and are closely related to quantum homomorphisms. Using the projective packing number, we show that there exists a quantum homomorphism from X to Y if and only if the quantum independence number of a certain product graph achieves |V(X)|. This parallels a well known classical result, and allows us to construct examples of graphs whose independence and quantum independence numbers differ. Most importantly, we show that if there exists a quantum homomorphism from a graph X to a graph Y, then ϑ̄(X) ≤ ϑ̄(Y), where ϑ̄ denotes the Lovász theta function of the complement. We prove similar monotonicity results for projective rank and the projective packing number of the complement, as well as for two variants of ϑ̄. These immediately imply that all of these parameters lie between the quantum clique and quantum chromatic numbers, in particular yielding a quantum analog of the well known ``sandwich theorem". We also briefly investigate the quantum homomorphism order of graphs.