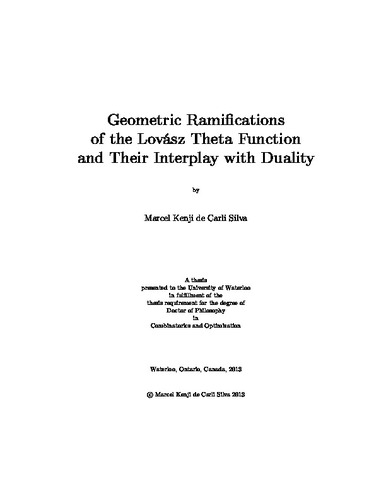 The Lovasz theta function and the associated convex sets known as theta bodies are fundamental objects in combinatorial and semidefinite optimization. They are accompanied by a rich duality theory and deep connections to the geometric concept of orthonormal representations of graphs. In this thesis, we investigate several ramifications of the theory underlying these objects, including those arising from the illuminating viewpoint of duality. We study some optimization problems over unit-distance representations of graphs, which are intimately related to the Lovasz theta function and orthonormal representations. We also strengthen some known results about dual descriptions of theta bodies and their variants. Our main goal throughout the thesis is to lay some of the foundations for using semidefinite optimization and convex analysis in a way analogous to how polyhedral combinatorics has been using linear optimization to prove min-max theorems. A unit-distance representation of a graph $G$ maps its nodes to some Euclidean space so that adjacent nodes are sent to pairs of points at distance one. The hypersphere number of $G$, denoted by $t(G)$, is the (square of the) minimum radius of a hypersphere that contains a unit-distance representation of $G$. Lovasz proved a min-max relation describing $t(G)$ as a function of $\vartheta(\overline{G})$, the theta number of the complement of $G$. This relation provides a dictionary between unit-distance representations in hyperspheres and orthonormal representations, which we exploit in a number of ways: we develop a weighted generalization of $t(G)$, parallel to the weighted version of $\vartheta$; we prove that $t(G)$ is equal to the (square of the) minimum radius of an Euclidean ball that contains a unit-distance representation of $G$; we abstract some properties of $\vartheta$ that yield the famous Sandwich Theorem and use them to define another weighted generalization of $t(G)$, called ellipsoidal number of $G$, where the unit-distance representation of $G$ is required to be in an ellipsoid of a given shape with minimum volume. We determine an analytic formula for the ellipsoidal number of the complete graph on $n$ nodes whenever there exists a Hadamard matrix of order $n$. We then study several duality aspects of the description of the theta body $\operatorname{TH}(G)$. For a graph $G$, the convex corner $\operatorname{TH}(G)$ is known to be the projection of a certain convex set, denoted by $\widehat{\operatorname{TH}}(G)$, which lies in a much higher-dimensional matrix space. We prove that the vertices of $\widehat{\operatorname{TH}}(G)$ are precisely the symmetric tensors of incidence vectors of stable sets in $G$, thus broadly generalizing previous results about vertices of the elliptope due to Laurent and Poljak from 1995. Along the way, we also identify all the vertices of several variants of $\widehat{\operatorname{TH}}(G)$ and of the elliptope. Next we introduce an axiomatic framework for studying generalized theta bodies, based on the concept of diagonally scaling invariant cones, which allows us to prove in a unified way several characterizations of $\vartheta$ and the variants $\vartheta'$ and $\vartheta^+$, introduced independently by Schrijver, and by McEliece, Rodemich, and Rumsey in the late 1970's, and by Szegedy in 1994. The beautiful duality equation which states that the antiblocker of $\operatorname{TH}(G)$ is $\operatorname{TH}(\overline{G})$ is extended to this setting. The framework allows us to treat the stable set polytope and its classical polyhedral relaxations as generalized theta bodies, using the completely positive cone and its dual, and it allows us to derive a (weighted generalization of a) copositive formulation for the fractional chromatic number due to Dukanovic and Rendl in 2010 from a completely positive formulation for the stability number due to de Klerk and Pasechnik in 2002. Finally, we study a non-convex constraint for semidefinite programs (SDPs) that may be regarded as analogous to the usual integrality constraint for linear programs. When applied to certain classical SDPs, it specializes to the standard rank-one constraint. More importantly, the non-convex constraint also applies to the dual SDP, and for a certain SDP formulation of $\vartheta$, the modified dual yields precisely the clique covering number. This opens the way to study some exactness properties of SDP relaxations for combinatorial optimization problems akin to the corresponding classical notions from polyhedral combinatorics, as well as approximation algorithms based on SDP relaxations.