DNA in Ionic Liquids and Polyelectrolytes 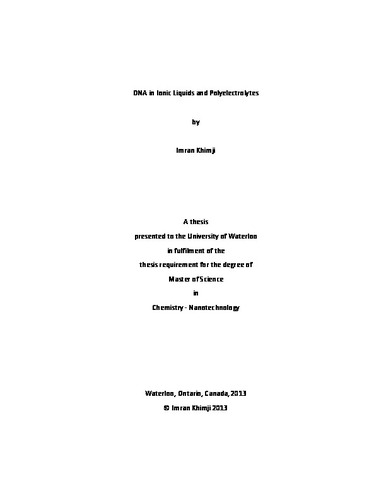 DNA has been widely studied in a variety of solvents. The majority of these solvents consist of either aqueous or organic components. The presence of ions or salts in these solvents can further alter DNA properties by changing the melting point or helical structure. The size, charge, and concentration of these additional components can all affect the behaviour of DNA. A new class of solvents, known as ionic liquids have recently gained popularity. Ionic liquids are comprised of entirely of ions and can be liquid at room temperature. Due to their low volatility and ability to dissolve both polar and non-polar substances, they are generating high levels of interest as ‘green solvents’. Although the interaction between DNA and ionic liquids has been characterized, the potential of this interaction is still being studied. It was discovered that when DNA mixed with DNA intercalating dyes was added to ionic liquids, there was a large reduction in fluorescence. Although this fluorescence drop was believed to occur to removal of the dye molecule from the helix, the strength of this interaction has not been researched. In this thesis, the interaction between different intercalating dyes and different ionic liquids was evaluated. We reasoned that perhaps the difference in interaction could be used as a method of separating the DNA-dye complex, which has previously never been accomplished. For example, it has been established that both DNA and cationic dyes have an affinity for ionic liquids. The relative strength of this affinity is undetermined, as well as the comparison to normal aqueous mediums. Although ionic liquids can drastically alter the stability of the DNA duplex by either raising or decreasing the melting point depending on the ionic liquid chosen, we found that the DNA actually has a higher affinity for the aqueous phase. Conversely, intercalating dyes prefer to partition into the ionic phase. The relative affinities of the two components are strong enough for their respective phases that the complex can be split apart and each component can be extracted, allowing for separation of the two.