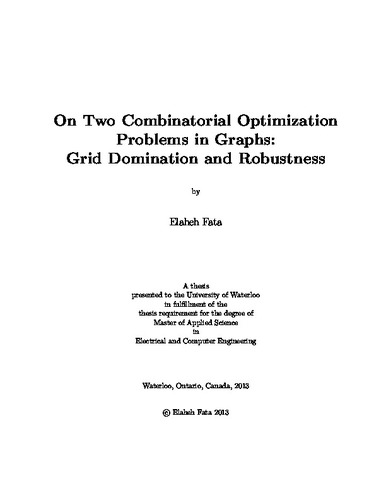 In this thesis, we study two problems in combinatorial optimization, the dominating set problem and the robustness problem. In the first half of the thesis, we focus on the dominating set problem in grid graphs and present a distributed algorithm for finding near optimal dominating sets on grids. The dominating set problem is a well-studied mathematical problem in which the goal is to find a minimum size subset of vertices of a graph such that all vertices that are not in that set have a neighbor inside that set. We first provide a simpler proof for an existing centralized algorithm that constructs dominating sets on grids so that the size of the provided dominating set is upper-bounded by the ceiling of (m+2)(n+2)/5 for m by n grids and its difference from the optimal domination number of the grid is upper-bounded by five. We then design a distributed grid domination algorithm to locate mobile agents on a grid such that they constitute a dominating set for it. The basis for this algorithm is the centralized grid domination algorithm. We also generalize the centralized and distributed algorithms for the k-distance dominating set problem, where all grid vertices are within distance k of the vertices in the dominating set. In the second half of the thesis, we study the computational complexity of checking a graph property known as robustness. This property plays a key role in diffusion of information in networks. A graph G=(V,E) is r-robust if for all pairs of nonempty and disjoint subsets of its vertices A,B, at least one of the subsets has a vertex that has at least r neighbors outside its containing set. In the robustness problem, the goal is to find the largest value of r such that a graph G is r-robust. We show that this problem is coNP-complete. En route to showing this, we define some new problems, including the decision version of the robustness problem and its relaxed version in which B=V \ A. We show these two problems are coNP-hard by showing that their complement problems are NP-hard.