Land, Water, Waste and Air: Resource and Promise in the Informal City 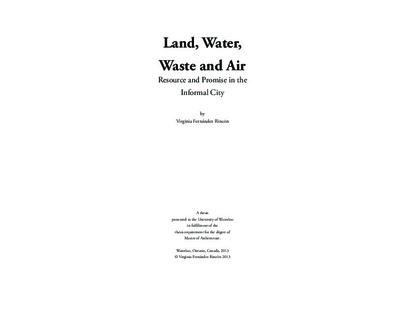 Striving for subsistence, the growing population of Caracas has radically transformed the city in the course of the past fifty years. The inability of the city to respond to the accelerated growth that resulted from mass rural migrations left millions to provide land, shelter and basic services for themselves. The barrios, once thought to be a provisional solution to the housing shortage, are now home to more than half the population of the city. The urban poor now live—out of necessity and through improvisation—on steep slopes, unstable soil and in flood plains. Overcrowded and remote, this very dense urban fabric receives sporadic or no basic services. Without land titles or addresses, and until recently omitted from most census data and official maps, the barrio’s population is excluded from the civic life of Caracas. Sitting between remediation and anticipation, three asynchronous projects elaborate pragmatic responses to the prevailing scarcity of resources while concurrently attempting to reduce the current cycle of poverty, violence and exclusion. In their ability to be informally adapted, the schemes test the capacity of popular manifestations of civic life to transform basic infrastructure into collective space. To overcome the precariousness that characterizes the barrios and incorporate them into the existing political mechanisms of the city, the projects are conceived as incremental frameworks that contribute to the physical integration of the ‘informal’ barrios to the ‘formal’ city. Working with water and waste infrastructure, I argue through these projects that architecture can build on the universal nature of necessity to frame a model of civic space­ generated out of the complexity of the barrios and on the auspice of promises.