Gallo-Roman Relations under the Early Empire 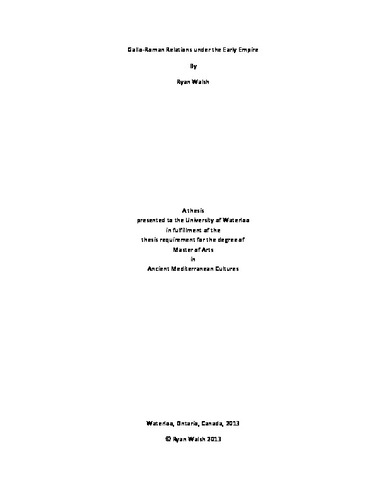 This paper examines the changing attitudes of Gallo-Romans from the time of Caesar's conquest in the 50s BCE to the start of Vespasian's reign in 70-71 CE and how Roman prejudice shaped those attitudes. I first examine the conflicted opinions of the Gauls in Caesar's time and how they eventually banded together against him but were defeated. Next, the activities of each Julio-Claudian emperor are examined to see how they impacted Gaul and what the Gallo-Roman response was. Throughout this period there is clear evidence of increased Romanisation amongst the Gauls and the prominence of the region is obvious in imperial policy. This changes with Nero's reign where Vindex's rebellion against the emperor highlights the prejudices still effecting Roman attitudes. This only becomes worse in the rebellion of Civilis the next year. After these revolts, the Gallo-Romans appear to retreat from imperial offices and stick to local affairs, likely as a direct response to Rome's rejection of them.