Moving from Darkness into Light: Meanings and Experiences of Yoga for Trauma Survivors 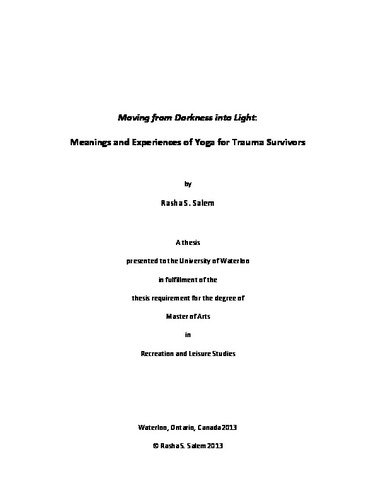 Traumas such as experiences of military combat, violent personal assault, natural disasters, severe vehicle accidents, being taken as hostage or prisoner, and diagnosis of life threating disease (American Psychiatric Association, 2000) impact every aspect and facet of the lives of trauma survivors including the physical, social, mental, emotional, psychological, and spiritual aspects of well-being. Trauma results in avoidance and dissociation, hyperarousal, and intrusion and constriction (Herman, 1997). Trauma may also lead individuals to anxiety, depression, somatization and cognitive distortions (Briere, 2004), disconnection from their bodies (Ogden el al. 2006; van der Kolk, 2006), and getting stuck in the past (van der Kolk et al., 1996). In leisure contexts, trauma may lead to experiencing avoidance, re-enactment in leisure, and the tendency to isolate and fear emotional and physical intimacy with others (Arai, Griffin, Miatello, & Greig, 2008). The foundation of trauma healing is establishing safety, mourning and reconnection with ordinary life (Herman, 1997), reconnection with the body, and being present (Levine, 2010). While cognitive therapy plays a role in trauma healing, somatic approaches provide additional support to reconnection of body and mind. Somatically-oriented therapies support trauma survivors to acquire a sense of safety and mastery over their bodies and to heal disconnection that results from trauma exposure (van der Kolk, 2003). The promise of interventions integrating body-mind in healing and support various mental health issues are growing and research is showing positive results. There is growing evidence of the role of physically-active leisure in healing trauma (Arai, Mock & Gallant, 2011). Yoga has been supported by a number of studies as a therapeutic intervention for both psychological and physiological conditions associated with trauma (Emerson & Hopper, 2011; Emerson, Sharma, Chaudhry, & Turner, 2009; The Trauma Centre, 2013; van der Kolk, 2012; Ware, 2007) and posttraumatic stress disorder (Descilo et al., 2007; Emerson et al., 2009; van der Kolk, 2012). Yoga originated over 5000 years ago in India and is a holistic and comprehensive system of practice and wellbeing that creates individuality, space, and opening allowing the self to be in the body without judgment. According to Iyengar (2002), yoga lifts up from clutches of pain and sorrow, and enables to live fully, taking a delight in life. The purpose of this phenomenological study was to explore the meanings and experiences of yoga for trauma survivors. Phenomenology attempts to capture participants’ perception of lived experience, plunging deep into the nature of being to embrace a mindful wondering about a project of life, of living, of what it means to live a life (van Manen, 2001). The study engaged thirteen individuals who experienced trauma and had been practicing yoga for at least five years in phenomenological interviews using open and active interview questions. Research questions guiding my study were: What is the nature of the yoga experience? What meanings do people who have experienced trauma make of this experience? What happens in the yoga experience that is healing? The findings emerged in the form of four essences describing the yoga experiences of participants: moving from the darkness of trauma into the light of yoga and living, entering into safe and sacred spaces, letting go into yoga and returning to embodiment of self, and embracing creativity and connection beyond the mat. Through the light that yoga brought into the darkness of the lives of the participants, they realized they are far more than just the trauma they experienced. This light allowed them know and touch the light within, feel safe again, reclaim their connection with self, befriending their bodies while being present in the moment and know the trauma has already happened and they do not have to stay there.