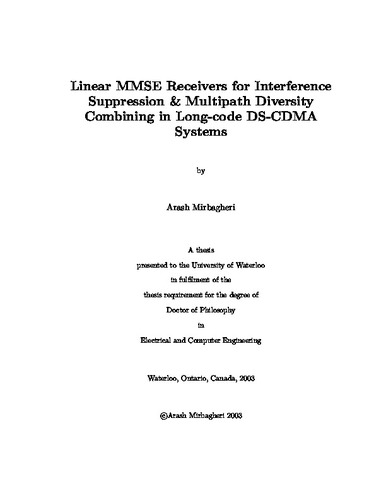 This thesis studies the design and implementation of a linear minimum mean-square error (LMMSE) receiver in asynchronous bandlimited direct-sequence code-division multiple-access (DS-CDMA) systems that employ long-code pseudo-noise (PN) sequences and operate in multipath environments. The receiver is shown to be capable of multiple-access interference (MAI) suppression and multipath diversity combining without the knowledge of other users' signature sequences. It outperforms any other linear receiver by maximizing output signal-to-noise ratio (SNR) with the aid of a new chip filter which exploits the cyclostationarity of the received signal and combines all paths of the desired user that fall within its supported time span. This work is motivated by the shortcomings of existing LMMSE receivers which are either incompatible with long-code CDMA or constrained by limitations in the system model. The design methodology is based on the concept of linear/conjugate linear (LCL) filtering and satisfying the orthogonality conditions to achieve the LMMSE filter response. Moreover, the proposed LMMSE receiver addresses two drawbacks of the coherent Rake receiver, the industry's current solution for multipath reception. First, unlike the Rake receiver which uses the chip-matched filter (CMF) and treats interference as additive white Gaussian noise (AWGN), the LMMSE receiver suppresses interference by replacing the CMF with a new chip pulse filter. Second, in contrast to the Rake receiver which only processes a subset of strongest paths of the desired user, the LMMSE receiver harnesses the energy of all paths of the desired user that fall within its time support, at no additional complexity. The performance of the proposed LMMSE receiver is analyzed and compared with that of the coherent Rake receiver with probability of bit error, <i>Pe</i>, as the figure of merit. The analysis is based on the accurate improved Gaussian approximation (IGA) technique. Closed form conditional <i>Pe</i> expressions for both the LMMSE and Rake receivers are derived. Furthermore, it is shown that if quadriphase random spreading, moderate to large spreading factors, and pulses with small excess bandwidth are used, the widely-used standard Gaussian Approximation (SGA) technique becomes accurate even for low regions of <i>Pe</i>. Under the examined scenarios tailored towards current narrowband system settings, the LMMSE receiver achieves 60% gain in capacity (1. 8 dB in output SNR) over the selective Rake receiver. A third of the gain is due to interference suppression capability of the receiver while the rest is credited to its ability to collect the energy of the desired user diversified to many paths. Future wideband systems will yield an ever larger gain. Adaptive implementations of the LMMSE receiver are proposed to rid the receiver from dependence on the knowledge of multipath parameters. The adaptive receiver is based on a fractionally-spaced equalizer (FSE) whose taps are updated by an adaptive algorithm. Training-based, pilot-channel-aided (PCA), and blind algorithms are developed to make the receiver applicable to both forward and reverse links, with or without the presence of pilot signals. The blind algorithms are modified versions of the constant modulus algorithm (CMA) which has not been previously studied for long-code CDMA systems. Extensive simulation results are presented to illustrate the convergence behavior of the proposed algorithms and quantify their performance loss under various levels of MAI. Computational complexities of the algorithms are also discussed. These three criteria (performance loss, convergence rate, and computational complexity) determine the proper choice of an adaptive algorithm with respect to the requirements of the specific application in mind.