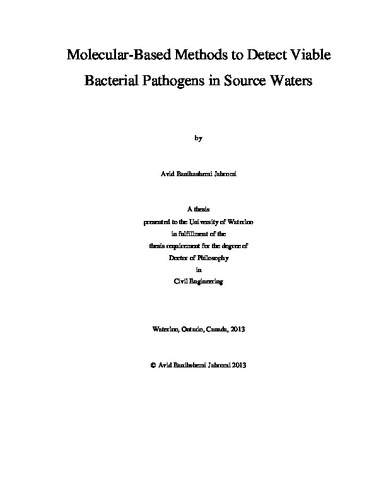 Humans can be exposed to waterborne bacterial pathogens and numerous outbreaks have been reported involving these microorganisms around the world. Many different enteric pathogens can be found in source waters used for drinking water. Assessing these pathogens and their possible threat to public health has always been important. Waterborne pathogens can be difficult to detect, and despite a large variety of recognized microbial detection techniques, the cause of many outbreaks has not been unidentified. Effective and rapid pathogen detection techniques are required to achieve reliable data for microbial source water quality, outbreak investigations, and for drinking water treatment efficacy monitoring. Bacteria have long been detected using classical culture-based methods, with the rationale that living cells are able to grow/replicate. However, many pathogenic bacteria in source waters may turn into viable but not culturable (VBNC) cells and are thus undetectable by growth-based methodologies. Alternatively, PCR-based techniques have been developed to detect both non-culturable and culturable bacteria. Yet with these techniques, post-death DNA persistency can inaccurately overestimate the number of viable cells. This problem may be circumvented by an alteration to the PCR procedure that is reported to be able to block PCR amplification of DNA that originates from dead cells. This alteration involves a chemical pre-treatment step prior to PCR using a photoreactive intercalating dye, propidium monoazide (PMA). In this research, a successful modification was made to the PMA-PCR method that can result in substantial suppression of the PCR signal from dead cells, and provide results that can more accurately measure bacterial pathogen viability. PMA-PCR was applied to high concentrations (1 × 107 cells mL-1) of heat-killed cells of Salmonella enterica and Campylobacter jejuni. Using PMA-PCR in combination with primers that amplified a relatively short fragment of the S. enterica invA gene (119 bp), only a 3-log reduction of the dead cell PCR signal was obtained. Similarly, for C. jejuni using PCR primers that amplified a relatively short fragment of DNA (174 bp of cpn60 gene), only a 1-log reduction of the PCR signal was observed for dead cells. Therefore, PMA treatment followed by PCR amplification of short DNA fragments resulted in incomplete signal inhibition of heat killed Salmonella and Campylobacter. To further investigate how PCR conditions can affect the ability of PMA to inhibit PCR amplification, primers were then used that could amplify a larger fragment of DNA. PCR amplification of a longer DNA fragment (1614 bp of invA gene for S. enterica and 1512 bp of cpn60 gene for C. jejuni) strongly suppressed the signal (7 log reduction) for both heat-killed Salmonella and Campylobacter. For UV-treated S. enterica and C. jejuni, short amplicon PMA-PCR showed no or very low PCR signal reduction, in part due to intact membranes directly after UV irradiation. Long amplicon qPCR, however, resulted in dead cell signal removal and PMA pretreatment had no effect on PCR signal suppression. This study used quantitative PCR and the PMA-PCR viability assays to evaluate the levels and occurrences of four groups of pathogenic bacteria in surface water samples from two locations on the Grand River, Ontario, Canada, to demonstrate the reliability of the PMA-PCR technique for the enumeration of viable cells. The bacterial groups investigated included S. enterica, thermophilic Campylobacter, Escherichia coli O157:H7, and Arcobacter butzleri. Small numbers of dead cells (not more than 0.5 log 100 mL-1) were present, detected as the difference between PMA-PCR and PCR without PMA treatment. In this particular river, pathogen enumeration by PCR was only slightly influenced by false positive signal detection due to the presence of dead cells or extracellular DNA and reliable bacterial pathogen detection could be attained by PCR without PMA pretreatment. Viable A. butzleri were detected at elevated concentrations (up to 4.8 log cells per 100 mL) in the Grand River. Arcobacter has not been previously studied in the Grand River and this is one of the few studies that have quantitatively assessed Arcobacter in the environment. This suggests that additional research is required on the pathogenicity of this organism and its occurrence in water. In the next stage of this research, both the improved viability assay (long amplicon PMA-PCR) and conventional quantitative PCR were applied to investigate the survival trends of selected enteric bacterial pathogens including Yersinia enterocolitica, S. enterica, C. jejuni, and A. butzleri. The target bacteria were inoculated into sterile or non-sterile river water to study the impact of background microbiota on cell survival. These experiments were perfomed at 3 different temperatures (5, 15, and 25°C) and at high/low dissolved oxygen (DO) concentrations (for C. jejuni, and A. butzleri only) to evaluate the effect of these potential environmental stresses on bacterial survival trends. The results indicated that the autochthonous microbiota in river water had a significant effect on the bacterial die-off. Although lower temperatures enhanced bacterial survival in non-sterile river water, it was found that PCR may overestimate the effect of temperature on survival and that the PCR viability assays (PMA-PCR) could more accurately measure the impact of temperature. The survival of viable C. jejuni was adversely affected by high DO levels only at a low temperature (5°C) and this effect was observed only when the PMA-PCR viability assay was applied. A. butzleri survival was not affected by water DO levels. This research provides an improved understanding of viable/active enteric waterborne bacteria and their survival in the aquatic microcosms as well as reliable data to better elucidate the effect of environmental factors on the occurrence of pathogenic bacteria. It can also offer valuable information for microbial risk assessments used by regulators and decision makers.