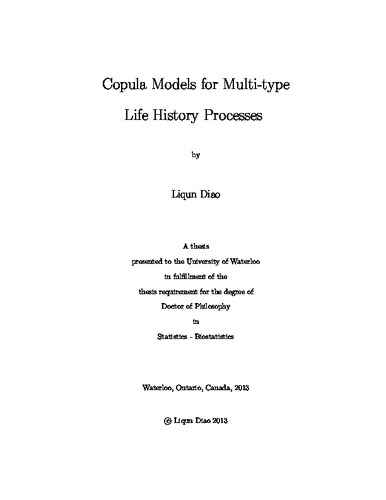 This thesis considers statistical issues in the analysis of data in the studies of chronic diseases which involve modeling dependencies between life history processes using copula functions. Many disease processes feature recurrent events which represent events arising from an underlying chronic condition; these are often modeled as point processes. In addition, however, there often exists a random variable which is realized upon the occurrence of each event, which is called a mark of the point process. When considered together, such processes are called marked point processes. A novel copula model for the marked point process is described here which uses copula functions to govern the association between marks and event times. Specifically, a copula function is used to link each mark with the next event time following the realization of that mark to reflect the pattern in the data wherein larger marks are often followed by longer time to the next event. The extent of organ damage in an individual can often be characterized by ordered states, and interest frequently lies in modeling the rates at which individuals progress through these states. Risk factors can be studied and the effect of therapeutic interventions can be assessed based on relevant multistate models. When chronic diseases affect multiple organ systems, joint modeling of progression in several organ systems is also important. In contrast to common intensity-based or frailty-based approaches to modelling, this thesis considers a copula-based framework for modeling and analysis. Through decomposition of the density and by use of conditional independence assumptions, an appealing joint model is obtained by assuming that the joint survival function of absorption transition times is governed by a multivariate copula function. Different approaches to estimation and inference are discussed and compared including composite likelihood and two-stage estimation methods. Special attention is paid to the case of interval-censored data arising from intermittent assessment. Attention is also directed to use of copula models for more general scenarios with a focus on semiparametric two-stage estimation procedures. In this approach nonparametric or semiparametric estimates of the marginal survivor functions are obtained in the first stage and estimates of the association parameters are obtained in the second stage. Bivariate failure time models are considered for data under right-censoring and current status observation schemes, and right-censored multistate models. A new expression for the asymptotic variance of the second-stage estimator for the association parameter along with a way of estimating this for finite samples are presented under these models and observation schemes.