Fear of Guilt in Obsessive-Compulsive Disorder 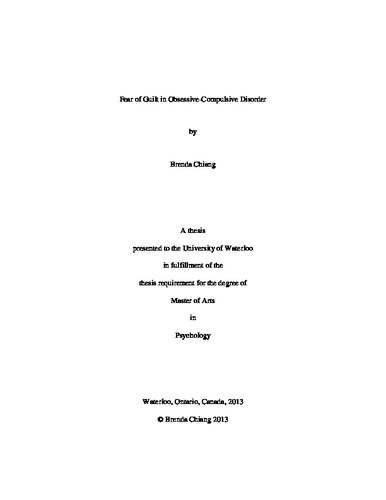 Obsessive-compulsive disorder (OCD) is a significantly impairing anxiety disorder for which the most successful treatment, cognitive behaviour therapy, has 50-60% success rates, taking into account treatment refusals and dropout rates (Fisher & Wells, 2005). Thus, factors that contribute to the persistence of OCD and interfere with treatment are likely being overlooked. Indeed, Mancini and Gangemi (2004) have proposed that individuals with OCD have greater fear of guilt than others; that is, they dread being judged as guilty for not having done everything in their power to prevent some negative outcome. This fear of guilt fuels obsessions and compulsions as individuals attempt to prevent, avoid, or neutralise the feared guilt. However, few studies have explored fear of guilt in OCD, and no scales exist to measure this construct. The role of fear of guilt in OCD was therefore examined across two studies. Study 1 explored the core features of fear of guilt in OCD, as well as the validity and reliability of the Fear of Guilt Scale (FOGS), a measure developed specifically to assess levels of trait fear of guilt in OCD. Results indicate that the FOGS is a valid and reliable, two-factor measure, and greater FOGS scores significantly predict more severe OCD symptoms among nonclinical participants. Study 2 aimed to determine whether fear of guilt evokes caution and feelings of doubt during the decision-making process, thereby making it more difficult to know when to stop and explaining perseveratory behaviour, such as compulsions in OCD. Findings suggest that greater fear of guilt does not predict more time taken or information needed to make decisions, but higher fear of guilt predicts feelings of uncertainty when deliberating, as indicated by ratings of greater difficulty making decisions, lower confidence in having made the right decisions, and less satisfaction with decisions made. Implications of these findings and the role that fear of guilt may play in the development and persistence of OCD are discussed.