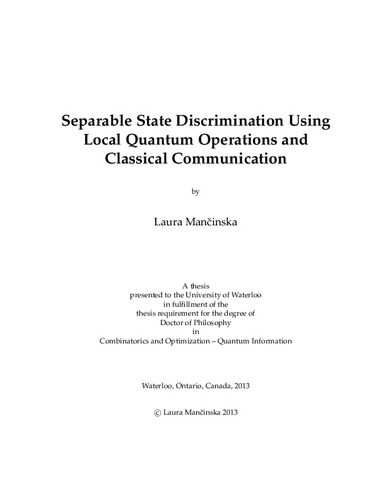 In this thesis we study the subset of quantum operations that can be implemented using only local quantum operations and classical communication (LOCC). This restricted paradigm serves as a tool to study not only quantum correlations and other nonlocal quantum effects, but also resource transformations such as channel capacities. The mathematical structure of LOCC is complex and difficult to characterize. In the first part of this thesis we provide a precise description of LOCC and related operational classes in terms of quantum instruments. Our formalism captures both finite round protocols as well as those that utilize an unbounded number of communication rounds. This perspective allows us to measure the distance between two LOCC instruments and hence discuss the closure of LOCC in a rigorous way. While the set of LOCC is not topologically closed, we show that the operations that can be implemented using some fixed number rounds of communication constitute a compact subset of all quantum operations. We also exhibit a subset of LOCC measurements that is closed. Additionally we establish the existence of an open ball around the completely depolarizing map consisting entirely of LOCC implementable maps. In the second part of this thesis we focus on the task of discriminating states from some known set S by LOCC. Building on the work in the paper "Quantum nonlocality without entanglement", we provide a framework for lower bounding the error probability of any LOCC protocol aiming at discriminating the states from S. We apply our framework to an orthonormal product basis known as the domino states. This gives an alternative and simplified bound quantifying how well these states can be discriminated using LOCC. We generalize this result for similar bases in larger dimensions, as well as the "rotated" domino states, resolving a long-standing open question. These results give new examples of quantitative gaps between the classes of separable and LOCC operations. In the last part of this thesis, we ask what differentiates separable from LOCC operations. Both of these classes play a key role in the study of entanglement. Separable operations are known to be strictly more powerful than LOCC ones, but no simple explanation of this phenomenon is known. We show that, in the case of bipartite von Neumann measurements, the ability to interpolate is an operational principle that separates LOCC and separable operations.